Jon Rahm says PGA Tour members should be "thankful" for the emergence of LIV Golf as he defended his friend Phil Mickelson. 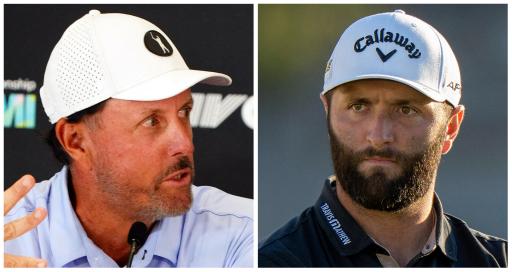 Jon Rahm came out swinging in defence of LIV Golf before Tiger Woods' Hero World Challenge, suggesting the players should be "thankful" the controversial series happened as he defended Phil Mickelson.

When Rahm was asked about LIV Golf in February when the series was very much in its infancy, the Spaniard said it would be the one and only time he would be prepared to talk about it as he pledged his "fealty" to the PGA Tour.

Which is odd because since then he has had no issue sounding off on the subject when asked. On LIV Golf, on the aforementioned Mickelson, on the "laughable" Official World Ranking System that even 15-time major champ Woods believes is "flawed".

Once again the 28-year-old former U.S. Open champion made it clear where he currently stands on the subject of LIV. In fairness to Rahm, while he has been linked with a move away, on the surface he seems very content with life on the PGA Tour.

He re-affirmed that commitment earlier this week when he announced he would be a participant in Woods' tech-fused golf league starting in 2024 - called TGL - which he is spearheading alongside Rory McIlroy in association with TMRW Sports.

Rahm was asked about Mickelson "shaking the tree" on Wednesday.

In response to a question about Mickelson's behaviour and comments over the past 12 months, he said:

"Well, listen, you're entitled to your own opinion and it's not my place to judge what you think and where you're coming from. Phil is my friend and I'm going to treat him as such. I understand why people think the way -- why people thought certain things. I may agree with it or not, but it's not my place to tell them what to say or not to say obviously. Some things I agree with, some things I didn't agree with."

Despite the clear division, Rahm doesn't necessarily believe it's been a bad year for the game.

Rahm echoed the sentiments expressed by Adam Scott who believes the PGA Tour and LIV Golf should go down their separate paths.

There is no need for negativity, in Rahm's opinion.

"I don't usually think about everybody else, but I try to -- I don't think it was a bad year for golf. Yes, there's certain division, but I think we're moving forward. I think the fans are getting, however you want to look at it on one side or the other, you're getting a different product. Change can always be exciting. Like I said, on this side a lot of the changes we owe to the appearance of LIV.
"I don't think it's a bad thing. I just hope the negative, let's say, feel that this whole thing has, right, the animosity goes away. I don't think there needs to be a lawsuit, I don't think each side needs to be saying anything negative about each other. If you want to try to co-sexist, co-exist. LIV can do their thing and the PGA TOUR can do their thing.
"You know, I just don't see the whole point of them saying something bad and then the PGA TOUR responding in a way. When I mean them, it can be players, it can be Greg Norman, it can be anybody on that side, right. That to me is just a bit of a waste of time. They're going to do whatever they want and on this side we're going to do whatever we want. At the end of the day, I think the fans are coming out on top."

His comments come as reports emerged Woods and PGA Tour commissioner Jay Monahan hosted another emergency meeting with the elite players over how to proceed with LIV Golf.

As for Rahm, he is scheduled to play the first round of the Hero World Challenge in Albany alongside Xander Schauffele, who also has poured cold water on suggestions he would be jumping ship.

Here are the tee times for R1 of the Hero World Challenge: