Patrick Reed said he was happy to 'silence' Presidents Cup hecklers with his singles match performance on Sunday. 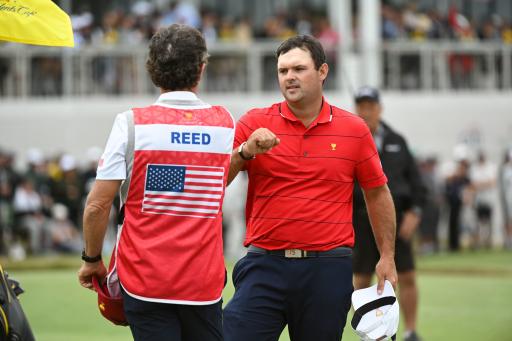 Following Patrick Reed's 'cheating' saga at the Hero World Challenge, he wasa always going to be the target at the Presidents Cup in Melbourne. Reed is used to playing the villain in golf, but he certainly made the target on his back a lot bigger after the controversial sand incident in the Bahamas.

Members of the crowd at Royal Melbourne did what they could to get in the head of Reed, singing songs about him, shouting witty remarks and some even carrying plastic shovels.

At one point, Reed reacted when a fan shouted "MISS!" during his putt, so the American celebrated sinking the putt with a shovel gesture, which only got the crowd going even more.

It was a difficult start to the Presidents Cup for Reed, losing his opening three matches alongside Webb Simpson. On Saturday, Reed's caddie and brother-in-law Kessler Karain had heard enough of some of the abuse being directed towards his player and snapped, shoving a spectator and as a result, was banned from Sunday's singles.

Reed's swing coach Kevin Kirk stepped in for the 29-year-old's singles match against CT Pan on Sunday, where Reed managed to stay focused as he thrashed the International rookie 4&2.

The match couldn't have started any better for Reed, who birdied six of his opening seven holes to go six up. Pan then reduced the deficit by winning four out of six holes from the eighth, but two more birdies for Reed at the 15th and 16th gave the American the win.

"You make birdies, you don't hear much," said Reed, who has now won three Presidents Cups.

"I think the biggest thing is just to continue grinding and not let the crowds or let people get in the way of what you're trying to do, and that's play golf.

"You know, the past couple days were tough, and you know, today still wasn't easy.

"The biggest thing was to come out today and continue playing some solid golf, get a crucial point early in the day to help the team."