From high school to high-flying Masters champion - we chart the course of Patrick Reed. 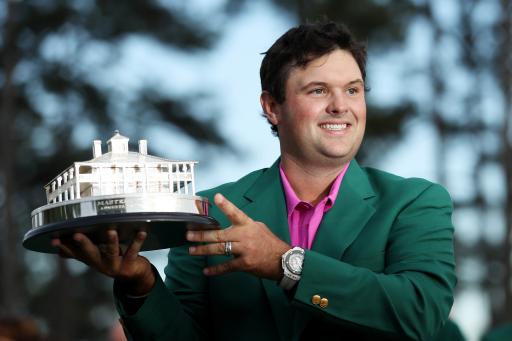 - Attends University High School, Baton Rouge, Louisiana, who he led to two state championships in 2006 and 2007.

Goes to University of Georgia, Athens, in 2008, and plays one year for the team.

At the 2008 US Amateur Championship

- Goes to University of Georgia, Athens, in 2008. Plays one year for the team.

- Accused of cheating on the course and stealing from the locker room while at the college.

- Arrested twice for intoxication - thrown out of University of Georgia and joins Augusta State.

Competing for Augusta State in 2011

- Gets to semifinals of 2008 US Amateur, where he loses 3&2 to eventual champion Danny Lee.

Playing the St Jude Classic, his first event on the PGA Tour

- Plays 12 events on the PGA Tour in 2012 thanks to sponsors exemptions and through Monday qualifying. Makes seven cuts, with a best finish at the Frys.com Open where he finishes T11.

- Marries Justine Karain, 21 December, 2012. She caddies for him for the first two years on Tour before pregnancy.

- Earns his PGA Tour card for 2013 with a T22 finish at PGA Tour Qualifying Tournament.

- First win comes in August at Wyndham Championship after coming through a play-off with Jordan Spieth.

- Wins the 2014 WGC-Cadillac Championship, becoming the fifth golfer to capture three PGA Tour events before turning 24 and also the youngest ever to win a WGC event at 23.

- After winning, infamously says he is a “top five player in the world”.

- Caught on microphone making a gay slur when missing a putt in late 2014 - apologises via Twitter.

- Debut at the Ryder Cup at Gleneagles. Goes 3-0-1 and famously “shushes” the crowd.

Getting it done in Hawaii.

- Wins fourth PGA Tour title at Hyundai Tournament of Champions in January 2015, becoming the fourth player to win four times before turning 25 - the others are Tiger Woods, Rory McIlroy and Sergio Garcia.

A big smile at the Barclays

- Beats Rory McIlroy 1 Up at the 2016 Ryder Cup in one of the most memorable matches of the modern era - earns the nickname “Captain America”.

Taking a shining to the majors...

...before landing his first.

Previous
Masters 2018: Sky Sports Golf or BBC?
Next
Patrick Reed wins the Masters... so is he now a Top 5 player?