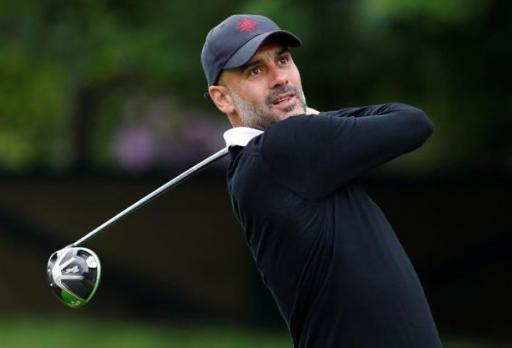 It's no secret that Manchester City boss Pep Guardiola is a huge fan of golf. He's played with multiple Tour professionals including Ryder Cup star Tommy Fleetwood and regularly watches tournaments whenever he can.

The Spaniard has played in Pro-Ams around the world and also starred in a football icons golf tournament that was shown on Sky Sports and it seems his passion for the sport has gone nowhere.

This week, Guardiola's Manchester City side face their local rivals Manchester United in the first leg of their Carabao Cup semi-final clash.

Guardiola came close to managing Manchester United following Sir Alex Ferguson's departure and he even met for lunch with the former Devils boss during his sabbatical after leaving Barcelona in 2012.

A fine wining and dining session wasn't enough to convince Guardiola, as he opted to join Bayern Munich instead and eventually to City where he has spent the last four seasons.

Speaking to the media ahead of Tuesday's derby, Guardiola made it clear that he could never manage United now that he has spent so many years with City.

Even if he had no other offers, Guardiola says that he would rather play more golf than work with his Manchester rivals.

“After training City I won’t ever train ­United. It is like I would never train Madrid. Definitely not. If I didn’t have any offers, I’d be in the Maldives. Maybe not the Maldives because it doesn’t have any golf courses! But in a place like that where I could play golf!”

NEXT PAGE: Man drains 96ft putt across a basketball court to win $5000