Phil Mickelson made his debut on the Champions Tour and opened up with a 10-under par score of 61. 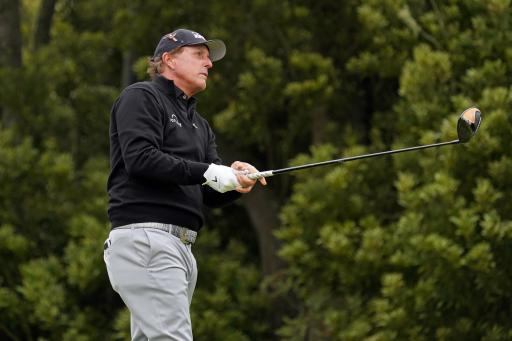 Phil Mickelson made a dream debut on the Champions Tour as he fired an opening round of 61 to take the lead at the Charles Schwab Series Event at Ozarks National.

The golf icon turned 50 in June, making him eligible to play on the Champions Tour, although he had said as long as he was still "hitting bombs" he would continue on the PGA Tour.

After missing the cut at The Northern Trust last week, Mickelson failed to qualify for the second play-off event at the BMW Championship this week, so chose to make his debut on the Champions Tour.

Ozarks National is set up for a birdie fest, with no rough making it extremely forgiving. Mickelson went hard at the par-5's, making three birdies and one bogey after he put his ball out of bounds at the 9th.

Mickelson made 11 birdies during his opening round and showed he still possesses power after driving the 350-yard par-4 3rd to set up a birdie.

"I had a lot of fun," said Mickelson, who played alongside Champions Tour veterans Retief Goosen and Steve Stricker.

"I enjoyed competing against Retief for so many years and Steve Stricker is one of my favorite people in all of golf. Watching Stricker roll in putts early in the round gets your mindset in a very positive frame and I tried to kind of take his feel and touch and rhythm of stroke and I made some on the back."

Mickelson, who has been one of the most dominant players to ever grace the game, racking up 51 professional wins, including five major championship, admitted he was feeling the pressure to make a solid start to his Champions Tour debut.

“I was a little nervous,” Mickelson said afterward. “I wanted to come out and play well. … I’ve been playing really well at home and I get out on tour and I’m playing tight, not letting myself go and swing free and aggressively. I get a little steery. To come out here and compete, it gives me a chance to work on that.”