The Ryder Cup may be over for another year, but Ian Poulter is still milking it... 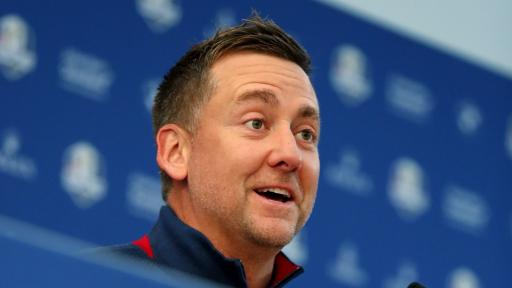 Ian Poulter has been there, seen it, done it when it comes to the Ryder Cup - he's even got the T-shirt.

Poulter - who proved his Ryder Cup pedigree once again at Le Golf National in September by taking two points from four - took to Twitter on Friday to remind U.S. Ryder Cuppers of this year’s match result, which saw the Europeans destroy the Americans 17.5-10.5.

The man aptyly named 'The Postman' donned a Team USA “Beat Europe” T-shirt and posted a photo as he stares off into the distance.

“Can anyone spot the mistake in this photo?” he asked.

Can anyone spot the mistake in this photo... ? @RyderCupEurope pic.twitter.com/jopZodybK2

An hour later, he then added a marker pen to his T-shirt with the word "couldn't" as he held the Ryder Cup in his hands.

Check out the responses of Jordan Spieth, Brooks Koepka and Rory McIlroy below...

It’s ok folks I fixed the mistake. How does it look now ? @RyderCupEurope pic.twitter.com/2i3uFRxyEr