Kate Middleton's golf swing could do with a bit of work... 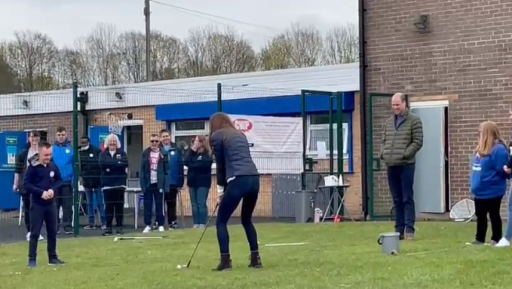 Prince William burst into laughter as his wife Kate Middleton hit an air shot during a charity event in County Durham today.

The Duke and Duchess of Cambridge were visiting the Cheesy Waffles Project, which received money from their £1 million wedding charity fund 10 years ago.

The project helps people between the ages of 7 and 35 to develop their skills and independence.

Kate and William got involved with a number of different activities during the event, one of which included a short game challenge.

Judging by the following videos, Kate could do with a few lessons from Tiger Woods or Rory McIlroy after she hit an air shot on the first attempt - much to the delight of husband William.

The Duke and Duchess of Cambridge have visited the Cheesy Waffles Project in County Durham, which received money from their £1m wedding charity fund 10 years ago. It helps people aged 7 to 35 to develop skills and independence. Kate may need some help with her golf skills. pic.twitter.com/qYT1HtQeqB

William, on the other hand, would appear to have visited the driving range at least a few times...

"Love how much William laughed at her when she missed the ball," read one tweet. "They are the best."

"It's so nice to see them so relaxed, able to laugh at themselves and with others," tweeted another.

"I can totally relate to that video," read another tweet.

Kate and William will celebrate their 10th wedding anniversary later this week.