Fowler misses one the smallest putt you will ever see en route to missing the cut at the PGA Championship... 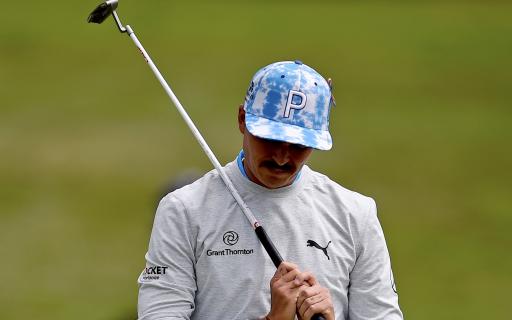 Rickie Fowler's impressive streak of never missing a major cut since the 2016 US Open came to an end on day two of the PGA Championship after missing the shortest putt of all time at TPC Harding Park.

Fowler left himself nine feet for par on the 6th hole (his 15th of the day) and he rolled his ball up to the cup just one inch away for what you thought would be a tap-in bogey.

Big fan of Rickie Fowler but that's a 6. He tapped that ball. #PGAChamp #PGA pic.twitter.com/8tY8DnVw5w

But as the American nonchalantly went to tap in his ball, he flubbed his stroke and the ball barely even moved. It would result in a double-bogey six.

Fowler would then go on to bogey the 8th hole to end up 1-under for the round, but it left him 2-over par for the championship and ultimately one stroke shy of making the weekend.

It just goes to show, always take your time on those tiny putts as you never know what might happen.

At the top of the leaderboard, China's Haotong Li hit the front on day two of the PGA Championship with an impressive 5-under par 65 to move to 8-under par for the tournament.

Li leads by two strokes over England's Tommy Fleetwood, who posted a best-of-the-week 64 to vault up into a logjam tie for second on 6-under par with compatriot Justin Rose (68), France's Mike Lorenzo-Vera (68), Australia's Jason Day (69), and American duo Daniel Berger (67) and Brooks Koepka (68).

Koepka is bidding to become just the seventh player in the history of the sport to win the same major three consecutive times.

Rory McIlroy carded a 69 to move to 1-under par, while Tiger Woods failed to fire with a 72 to fall back to level-par for the tournament.

Elsewhere, Shane Lowry was seen snapping one of his irons over his knee en route to a 2-over par 72 that saw him fall back to level-par for the championship.