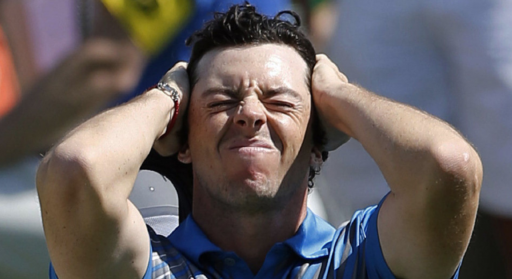 Rory McIlroy was caught dropping an F-Bomb during the second round of the RBC Heritage, as Sir Nick Faldo hilariously claimed it was a "technical term for blocking it right."

McIlroy may have posted a 65 on Friday but he went on to finish tied 41st at Harbour Town Golf Links, marking the World No.1's worst result since missing the cut at the 2019 Open Championship. WARNING: the following video contains strong language...

Rory, we know your pain! pic.twitter.com/OTscSvcs4v

"Excusez-moi, that's a technical term for he keeps blocking it right," said Faldo immediately hearing McIlroy's expletive on the tee.

On Thursday, one of the most comical moments happened during the RBC Heritage when Adam Hadwin was mic'd up during the first round.

Hadwin thought he had moved a rock from behind his ball, but it was actually sand, and it resulted in a one-stroke penalty for accidentally moving sand in a bunker.

Watch what happened in the video below...

Adam Hadwin gets penalized for removing sand that he mistakes for a rock...

His response: “Screw you, but thanks”

We need mics on all of the players, all of the time.pic.twitter.com/xQMlTv4eKT

"I removed a rock, then went to remove another rock," Hadwin told the rules official.

"As I grabbed the said rock, it crumbled as it was actually sand. It looked like a rock to me that's why I tried to move it.

"It was right behind the ball. I went to grab and it disintegrated in my hand. I assume it's a penalty. The ball didn't move. Ohhhh great."

The rules official then notified Hadwin of his one-stroke penalty for touching the sand, to which the Canadian jokingly replied: "Well not thank you, screw you, but thanks."