Rory McIlroy took part in a new series from TaylorMade Golf which challenged his recovery skills to the max. 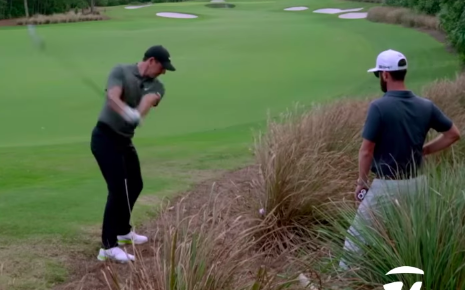 Rory McIlroy produced a stunning recovery shot with his ball stuck in a bush during a new, special TaylorMade series.

The Northern Irishman had his skills of escapology challenged in a new feature called Rough Situations. TaylorMade's Chris Trott gave him a set of shots that many of us would find impossible to play, but not for McIlroy.

McIlroy conquered the majority of them and came up short with some, but he was faced with an extremely difficult situation that would be rare to find even in the extraordinary game of golf.

RELATED: THE BEST GOLF JACKETS FOR AUTUMN/WINTER FROM AMERICAN GOLF!

His ball was stuck halfway up a thin bush to the right of the fairway. The ball was suspended just over a foot in the air, and the wind was still causing it to oscillate as well.

McIlroy took out a wood and with 246 yards to the pin, he plucked the ball from the reeves and it sailed towards the green. Unfortunately, it finished just right of the putting surface, but it was an extremely impressive shot.

Although the ball was sitting up kindly, it would be almost impossible for the majority of us to hit a clean shot from the bush. The 32-year-old had to use all the skills he had to produce such a great shot.

Each week on the PGA Tour, the players can find themselves in some very tricky positions and their recoveries are usually spot on. As McIlroy shows us, he has the ability to get himself out of the worst situations.

The four-time major winner completed the Rough Situations challenge with flying colours and don't be surprised if we see more PGA Tour stars participate in this series as well.

NEXT PAGE: NO TIME TO DIE: PLAY THE 007 GOLF BALL RELEASED BY PENFOLD GOLF