Sung Kang tied the second-lowest score of his PGA Tour career after firing a 61 at TPC Summerlin on Thursday. 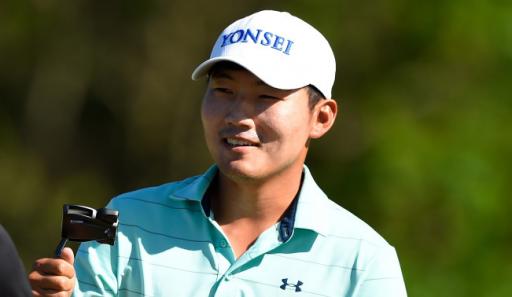 Sung Kang burst to the top of the leaderboard at the Shriners Hospitals for Children Open on Thursday, firing an incredible round of 10-under-par.

Kang, 34, began his round on the 10th hole at TPC Summerlin and he made five birdies in his first nine holes to make a hot start to the tournament.

The South Korean made his sole bogey of the day at the par-4 3rd hole. He put this behind him by making four more birdies and a fantastic eagle on the 9th hole, his final hole, to secure his score of 10-under-par.

Kang's 61 ties the lowest score in the first round of a PGA Tour event since Matt Jones' opening round at the 2021 Honda Classic. Jones went on to win this event, so this could be a good omen for Kang.

RELATED: JON RAHM IN POSITION TO DO WHAT ONLY TIGER WOODS HAS DONE SINCE WORLD WAR TWO

What a day for Sung Kang.

The one-time PGA Tour winner leads ahead of his fellow countryman Sungjae Im, who shot a bogey-free round of 8-under-par to sit two shots behind after 18 holes.

It was a very low scoring day in Las Vegas, which will also host The CJ Cup next week, and Hideki Matsuyama and Corey Conners shot great rounds of their own.

The 2021 Masters champion shot 6-under-par on Thursday to sit four behind Kang, while the Canadian Conners is one shot further back on 5-under-par.

Louis Oosthuizen, who finished second on four occasions last season, shot a 65 of his own to sit four shots behind Kang.

PGA Tour rookie Hayden Buckley made the first hole-in-one of his career on tour at the par-3 17th hole on Thursday. He also made a good start at TPC Summerlin with an opening 66.