Rory McIlroy off to solid start at Wells Fargo Championship

McIlroy hits 3-under 68 to start nicely at Quail Hollow. 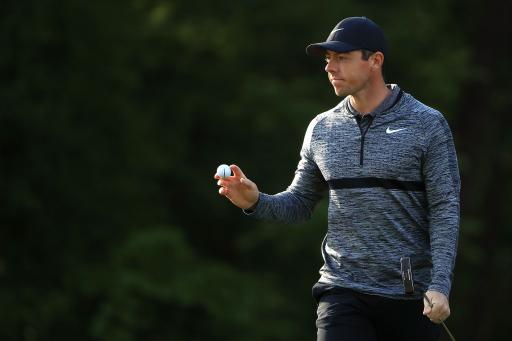 Rory McIlroy got off to a fast start on a tricky opening morning of scoring at the Wells Fargo Championship by posting a solid 3-under 68.

McIlroy was making his first appearance since his lacklustre final-round 76 at the Masters.

The former world number one is bidding to win the Wells Fargo for a third time following wins in 2010 (his first PGA Tour victory) and 2015.

McIlroy mixed five birdies with two bogeys to shoot a first-round 68, which currently positions him in the top five on the leaderboard and just one stroke off the pace as the afternoon wave of players begin their rounds.

Starting on the par-five 10th hole, McIlroy opened with a birdie after a fine chip shot from 40 feet left him with a tap-in. A 340-yard drive on the 12th helped set up a second birdie on the 12th and he also birdied the par-five 15th to get to three under.

McIlroy’s first dropped shot came at the 18th when he found water with his approach shot to the par-4.

He got that shot back on the second when another fine approach shot saw him slot in a 10-foot breaking putt for a fourth birdie of the day.

Missing the green to the left on the par-three sixth hole, McIlroy failed to get up and down and dropped a second shot. He took his opportunity on the par-five seventh to bounce back with a final birdie of his round before closing out his day’s work with two pars.

The Ulsterman was errant off the tee for much of the day, finding just 29% of his fairways, but he performed well with his irons finding 77% of the greens. He also took his chances when he had them on the greens with a solid strokes-gained putting statistic of 1.551.

England's Tyrrell Hatton went one better with a 67, while compatriots Paul Casey and Ross Fisher opened with rounds of 69.

Tiger Woods has just teed off and is level par for his opening three holes.