Rory McIlroy starts Open with quadruple, ends with triple for 79...

Home favourite McIlroy cards the worst opening round in his major championship career. 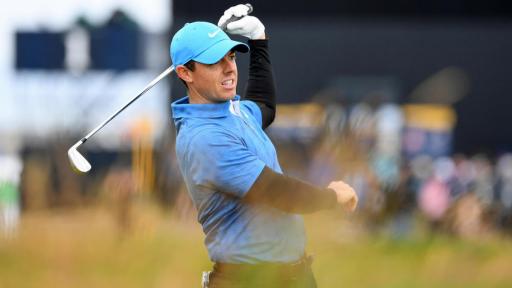 Rory McIlroy endured the worst opening round of his major career following an 8-over 79 at The Open on home soil at Royal Portrush.

McIlroy came into golf's final major of the year playing some of the most consistent golf of anyone, but with the pressure of playing in front of his adoring home fans, the Ulsterman crumbled as early as the first hole.

The four-time major winner sent his tee shot down the first out of bounds - smashing a lady's phone in the process - just as he did during his Wednesday practice round.

He then sent his next ball into the deep rough and hacked out into more rough - so deep in fact, McIlroy was forced into taking an unplayable lie and dropped shot. From there, he sent his ball onto the green, and two-putted for a quadruple-bogey eight.

A bogey followed at the third, and despite birdies at 7 and 9, McIlroy handed them both back with a three-putt from four feet en route to a double-bogey five at the lengthy par-3 16th.

McIlroy then found big trouble off the 18th tee and compounded the mistake by sending his fourth shot into the deep rough right of the green. He chipped up to inside of 10 feet but missed the putt and tapped home for a triple-bogey seven.

It all went down for a tournament-ending 79, which is one more shot per hole than the course-record 61 he shot here as a fresh-faced 16-year-old.

"I was understandably nervous on the first tee, got a bad lie with the tee shot, and it wasn't the ideal start," said McIlroy.

"I battled back with some birdies, and held it together in some pretty tough conditions on the back nine.

"I lost some concentration towards the end. I got a dreadful lie at 18 and I guess it was just one of those days.

"I didn't hit it well enough though. I put myself behind the 8-ball at the start, and had I got it back to 2-over it would have still kept me in there but now it looks like I'm too far back."