Rules of Golf: Can you tee your ball like this? What is allowed in the tee box?

We don't advise trying to hit the ball off two tee pegs - but here's what to do if you find someone trying this. 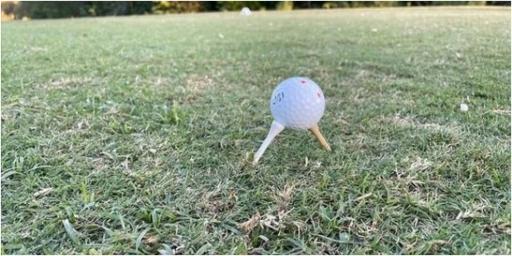 Here at GolfMagic we're quite sure you've seen some pretty strange things on the golf course.

We all have, from the bizarre to the hilarious - but there are so many rules that we didn't know about.

That's where we come in, we endeavour to help you understand in a clear and concise way so you are in the know.

No longer will you be scrambling to get out your smartphone so you can Google what to do.

An image posted of the popular Instagram page @golf_rulesquestions threw up another interesting scenario the other day.

It showed a ball being teed up by two tees at the same time.

We're not quite sure exactly what would happen if you were to hit.

But it's probably not a good idea to try.

RELATED: SHOULD STEVE STRICKER CAPTAIN THE US AGAIN IN ROME?

Hypothetically, though, are you allowed to use two tees on one ball in the tee box?

The short answer is: no.

Under rule 6.2b(2) you may place your ball on a tee (singular) within the teeing area when starting play of a hole.

To go into further detail:

A tee must be placed in or on the ground.

The "ground" includes sand or other natural materials put in place to set the tee or ball on.

The player must not make a stroke at a ball on a non-conforming tee or a ball teed in a way not allowed in this rule.

The penalty for first breach from a single act or relacted acts is a general penalty (loss of hole in matchplay, two strokes penalty in stroke play)

The penalty for a second breach is a disqualification.

Penalty for Breach of Rule 6.2b(2): Disqualification.

So now you know.

NEXT PAGE: THE BEST BASKET DRILL TO IMPROVE YOUR DRIVING