Should Steve Stricker be RETAINED as the Ryder Cup captain after one-sided win?

Tiger and Phil joked to him he'd never be a captain because he hasn't won a major - he has now. 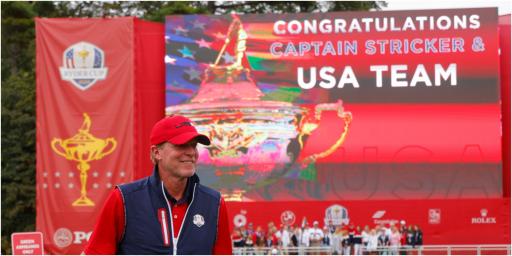 Steve Stricker paused and said: "You're trying to get me to cry, aren't you?"

The interviewer was and Stricker did obliged, his red face showing the emotion of a man who'd finally captured his major.

His major wasn't an individual accolade but winning the Ryder Cup as he unleashed his superhuman Americans on a washed-up Europe.

19-9. A blowout. And while the inquest into Team Europe's woes begins in earnest the question for Stricker is: should I do this again?

If the United States are to usher in a new period of dominance then we can take an answer out of Dustin Johnson's mouth.

Absof...lutely. If the United states are serious - then they need to ditch plans on handing over the reins to Zach Johnson.

Nothing against Johnson at all, but surely now the Americans can move away from the fact it's all about whose "turn" it is.

It was supposed to be Stricker's turn at Hazeltine but Phil Mickelson muddied the waters by criticising then-captain Tom Watson.

Mickelson was not happy with his captain and it lead to a taskforce to try and sort out the American Ryder Cup problems.

That lead to the reinstatement of Davis Love III and Stricker was stepped-over, waiting in the wings.

Stricker is just a guy you want to keep around. He's been captain of two American sides now and it has resulted in two shellackings.

The combined score for the Presidents Cup in 2019 and the Woopin' at Whistlin' combines for a score of 38-20.

Stricker is a low-key guy, very much respected on Tour who has never lost touch with his routes.

You could tell just how much it meant to him for the good-but-not-great career he has had.

His resume is unlike any other previous Ryder Cup captain, never winning one of the big ones.

His Ryder Cup record isn't particularly stellar, either. It's 3-7-1. But his record as captain stands out.

Even Jordan Spieth thinks so.

"There’s no fakeness to Steve Stricker," he has been quoted as saying. "What you see every time you talk with him is what he is."

While Stricker has immediately back-tracked on the possibility of leading the side out in Rome, he should think again.

And so should those in charge of deciding who will be captain.

NEXT PAGE: R&A TO HONOUR SEVE WITH NEW EXHIBITION AND FILM