Sergio Garcia: Open Championship would be "icing on the cake"

EXCLUSIVE INTERVIEW: GolfMagic talks to Sergio Garcia at Wentworth Golf Club about the 2019 Open Championship, the Ryder Cup, adidas Golf and much more. 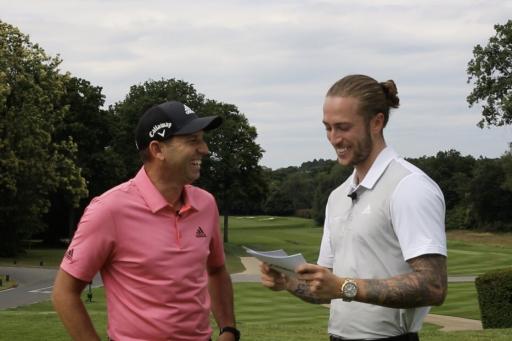 In 2017, Sergio Garcia conquered a mission that every golfer in the world dreams of, by winning a major championship and becoming a Masters Champion. Garcia is still as hungry for success as ever and in an exclusive interview with GolfMagic, he told us that winning the 2019 Open Championship would be the "icing on the cake" for his career.

In 1999, a 19-year-old Sergio Garcia produced one of the greatest golf shots of all time and certainly one of the most memorable. It was the PGA Championship at Medinah where a rivalry between Tiger Woods and Sergio Garcia was born. Woods may have taken home the trophy that day, but for those of us old enough to remember that Sunday round, we remember it for only one thing, Garcia on the 16th.

On the par-416th hole at Medinah in the final round, Garcia had cut the defecit to one shot, but found his tee shot sitting close to one of the thousands of trees at Medinah Country Club. Hitting the green looked impossible, but Garcia, a mere 19 year old at the time, opened the face of his six iron and swung hard with intent, moving his face out of the way as he made contact in fear of the ball rebounding off the tree. The ball missed the tree, fading from left to right and towards the green, with Garcia charging down the fairway to get a better look at the shot and jumping into the air to watch the ball come down onto the dance floor. The crowd went wild and 'El Niño' was born.

Two decades later, Garcia celebrates his 20 year relationship with adidas Golf and the Spaniard recently put on a modern edition of the famous adidas polo and recreated the scene from 1999.

Speaking with Garcia at Wentworth, he told us that the Open Championship is his favourite tournament and how much it would mean for him to win it.

"It would be the icing on the cake," he said. "It's a championship that I've always loved since I was very little and it really motivates me a lot."

Garcia's friend and fellow countryman Jon Rahm recently won the Irish Open for the second time in his career, so we wanted to know if Garcia believes in the hype around Rahm and whether he could be the next major champion to hail from Spain.

"He definitely has the game [to win a major]. It's a lot tougher than people think it is. We've seen Jack win 18 and Tiger win 15 so people think it's easy but it's not. He's still young and he's still learning but he's getting himself into the positons to have a chance. He's a good player."

The Open Championship at Royal Portush takes place in just over a week's time and Garcia certainly has the experience to win his second major. Every Open Championship winner for the past eight years has had at least one top-10 finish in the Open Championship before going on to lift the Claret Jug, so Garcia definitely fits the bill. The 2017 European Golfer of the Year has had ten top-10 Open Championship finishes, including coming second on two occasions, the last in 2014 where he finished just two shots behind Rory McIlory. Can Garcia fulfill his childhood dream of becoming an Open Champion?