Europe move into a 9-7 lead over the United States heading into the final day singles. 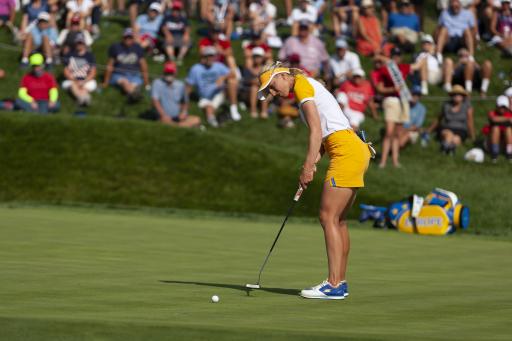 Europe moved into a 9-7 lead on day two of the Solheim Cup as they bid to win the biennial ladies contest just for the second ever time on American soil.

Catriona Matthew's side had trailed at one stage in all four of Sunday's fourballs matches but they recovered well to win the session 2.5-1.5 to move two points clear heading into the Monday Singles.

American duo Yealimi Noh and Mina Harigae won the first of the fourballs matches with a 3&1 victory, but Europe responded with wins for Carlota Ciganda and Nanna Koerstz Madsen (1 up) and Charley Hull and Emily Pedersen (3&2).

Mel Reid and Leona Maguire then halved their match on the 18th hole thanks to a superb birdie from Reid.

"Every half point, I’ve realised over the years, is absolutely crucial," said Europe's captain Matthew.

"From the start to the day it looked like the momentum was kind of heading towards the US, but kind of edged back a little bit in the afternoon and that half point has buoyed us up I think.

"(We’re) very confident. Two-point lead, we would have taken that when we teed off the first round. So yeah, delighted to be going in with a lead."

Europe's only previous win on US soil came with an 18-10 victory at Colorado Golf Club in 2013.

USA will be looking for revenge following Europe's memorable one-point victory (14.5-13.5) at Gleneagles in 2019.