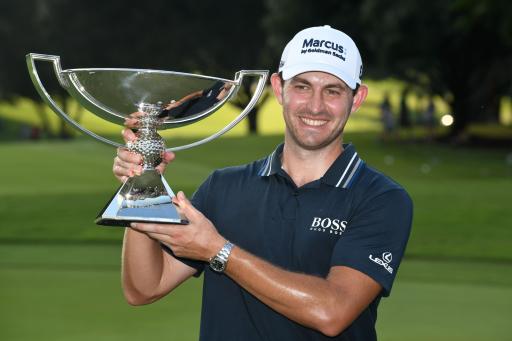 Patrick Cantlay has won the PGA Tour's FedEx Cup for the first time in his career following victory at the Tour Championship.

Cantlay, 29, carded a final-round 69 to finish 21-under par and one shot ahead of his playing partner and World No.1 Jon Rahm, who posted a 68.

Cantlay, who has now won back-to-back tournaments on the PGA Tour and six times in total, collects a cool $15 million first prize for having won the Tour Championship and resulting FedEx Cup.

RELATED: WHO IS PATRICK CANTLAY'S WIFE?

Cantlay started the final round two shots clear on 20-under par and he quickly extended that cushion to three with a birdie at the par-3 2nd.

The American exchanged a bogey at the 5th with a birdie at the 6th, and he would go out in level-par when making a second bogey of the day at the 9th.

Cantlay maintained a one-shot lead with pars over the next six holes before firing a stunning approach into five feet at the par-4 16th to move back into a two-shot lead with two holes to play.

Cantlay would open the door for Rahm on the par-4 17th when going long and left with his approach shot, and despite coming up short of the green with his chip shot, managed to salvage a bogey from six feet to take a one-shot lead up the par-5 18th.

Both players would find the fairway off the tee.

Rahm hit a stunning 5-iron straight down the flag and was unlucky to see his ball nestle into the back rough some 20 feet away.

Cantlay then followed suit by striking a superb 6-iron into the heart of the green to 12 feet.

Rahm needed to hole out for any chance of forcing a playoff but his chip shot agonisingly slipped past the left side of the hole.

Cantlay was then afforded the luxury of two-putting for birdie and the biggest pay day of his life.

Kevin Na finished in solo third place on 16-under par, one shot ahead of Justin Thomas.

Xander Schauffele and Victor Hovland were a further shot back in tied fifth.

Bryson DeChambeau finished solo seventh on 13-under par, two shots ahead of Dustin Johnson in eighth.

NEXT PAGE: JOAQUIN NIEMANN PLAYS THE FASTEST EVER ROUND AT THE TOUR CHAMPIONSHIP