Stacy Lewis OUT of Solheim Cup due to injury

Stacy Lewis has withdrawn herself from the USA Solheim Cup team due to a back injury. 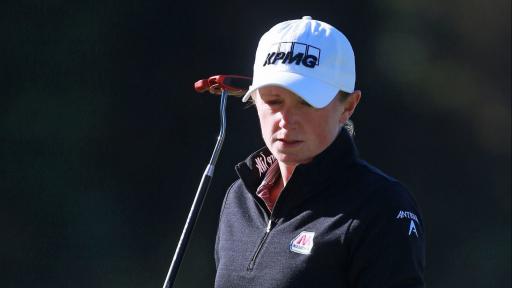 Stacy Lewis has had to withdraw from the Solheim Cup due to a problem with her back. United States captain Juli Inkster announced on Tuesday morning that Lewis, who was a captain's pick, will no longer be participating in the event. Lewis revealed that she suffered an injury to her back and has tried to manage the injury but to no avail.

Lewis is one of the most experienced players in the event, hence why she was such a crucial captain's pick for Inkster, but she will now miss what would have been her fifth Solheim Cup.

“I’m extremely disappointed not to be able to play,” Lewis said in a statement. “I’ve done everything I could possibly do over the last week to be ready to play. For my health and what I feel is in the best interest of the team, I decided to take myself out. I will take a different role with the team and will do whatever I can to help Team USA bring the Cup home.”

Ally McDonald will now replace Lewis in the American team, as she was Inkster's alternate pick. Alternate picks remain unknown unless someone in the team is forced with withdraw, which last happened at the 2017 Solheim Cup, when Jessica Korda was unable to play due to a forearm injury and was replaced by Paula Creamer.

“Stacy is one of the fiercest competitors I have ever met," Inkster said. "I know this was an incredibly tough decision for her, but she also has the team’s best interests at heart. Stacy will stay with Team USA over the next week and will still be an incredible asset to our crew. But when I had to choose an alternate, I knew Ally would be able to step up for the challenge. She’s got a cool head but a fiery spirit. I know she’ll bring her best to Team USA.”

McDonald graduated from Mississippi State in 2015 and was a two-time first-team All-American there. This will be McDonald's first Solheim Cup, but she is an experienced player, playing her fourth LPGA Tour season in 2019.

“I didn’t want to make the team this way, but when Juli told me what was going on with Stacy, I was ready to step into either role, if that was being here and being part of the experience or being ready to tee it up,” McDonald said. “It was just mentally preparing for either scenario. I’m obviously very excited to play. This was a goal of mine to play on this team.”