Tiger Woods addressed the Patrick Reed situation at a press conference in Melbourne. 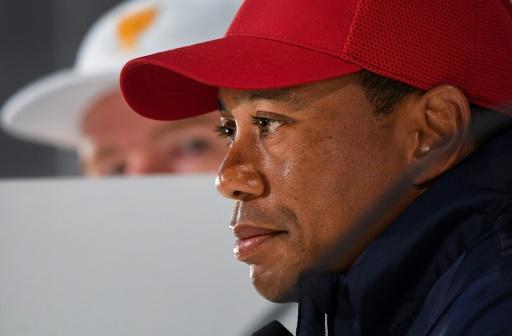 Last week, Tiger Woods was hosting the Hero World Challenge in the Bahamas, where the Patrick Reed 'cheating' saga took place. The incident has made headlines all over the world and many believe it will continue this week at the Presidents Cup, with Reed set to receive a frosty reception from the Melbourne crowd.

Eleven of the twelve players representing the USA in the Presidents Cup played in the Hero World Challenge last week, so the team all made the 26-hour journey from the Bahamas through Acapulco, Mexico and finally Melbourne, together, including Reed.

After the long journey, Justin Thomas and Xander Schauffele joined their playing captain Woods at an exhibition at Yarra River, while the Rest of the World captain Ernie Els had Australian duo Adam Scott and Cameron Smith by his side.

RELATED: Cameron Smith hopes the crowd "absolutely gives it" to Reed at the Presidents Cup

Following the 70-yard shootout in which Thomas seemed to shine, the players faced questions from the media and of course, Woods was soon asked whether he had spoken to Reed about the incident.

“Yes, I have spoken to Pat about it, it’s behind us, we’re onto this week, we’re focused on going against this great International team here,” said Woods.

“As we all know, Pat was penalized and that was it, end of story. Unfortunately, he missed the playoff by those two shots but we’re looking at this week.”

Woods was also asked what he and the team got up to during their long flight from the Bahamas, which involved playing cards, sleeping and story telling.

“It’s a great team, a great mix, a couple of older guys but the majority of the team is under 30,” Woods told RTE. “I’m telling stories about what happened way back in ’98 when some of these guys were in diapers.”