Tiger Woods reveals what went wrong in his match vs Phil Mickelson... 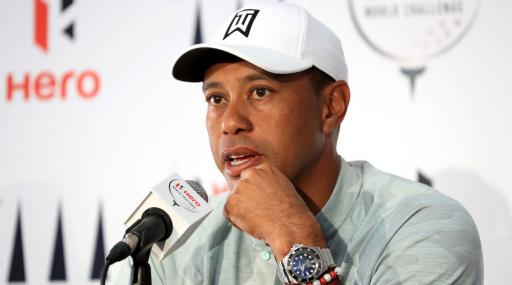 Tiger Woods has expressed his disappointment at neither he or Phil Mickelson playing their best golf during their $9 million match in Las Vegas on Friday night.

Woods was defeated by Mickelson at the fourth extra hole of their match, with neither player making more than four birdies in what turned out to be a damp squib of a game (watch highlights here).

"I wish we both would have played better, but neither one of us putted well that day out there," said Woods. "We should’ve each played seven or eight birdies a piece,” Woods told reporters in his pre-tournament press conference at the Hero World Challenge.

In the eyes of the former world number one, the green speeds and pin positions did not make life too easy.

"There’s some things in which we can make it better for the viewer, but I think a lot of people turned in and tried — well, tried to watch and then ended up watching," he said.

"Maybe going forward, just don’t quite have the greens so fast or the pins so difficult."

Even Charles Barkley - the man with arguably the worst golf swing in the world - took a pop at quality of golf he was witnessing.

"This is some crappy golf," said Barkley, who was commentating when Woods and Mickelson reached the ninth. "Y’all know that. I could beat these two guys today."

Maybe going forward, just don’t quite have the greens so fast or the pins so difficult.

According to Turner Sports - who are this week refunding customers due to the technical issues experienced during the coverage - they recorded 750,000 unique views and 55 million minutes were streamed on the B/R Live Stream on Friday night. That figures does not include those who watched through their cable provider.

Despite the initial backlash 'The Match' received both on and off the course, Turner President Dan Levy is taking the positives from it all.

"We don’t have all the facts and figures, but based on early indications, total audience for 'The Match' surpassed expectations across all of our platforms," Levy told Sports Business Journal. "We are in this for the long haul."

As for the glitch that forced the company to offer the stream for free, instead of the $19.99 that was initially being asked, Levy estimates it translated into $10 million in lost revenue.