WATCH: and he gives us a signature fist pump too! 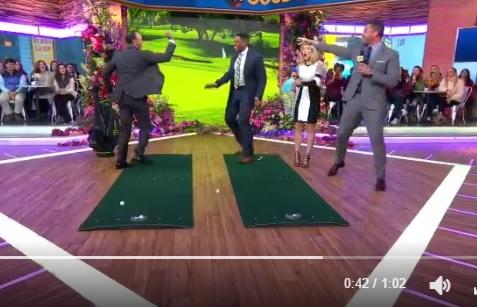 Tiger Woods may still be on the fence with regard to teeing up in next month's Masters, but he has at least shown some promising form on the greens.

Well, by holing four out of six putts from six feet against American Super Bowl Hall of Famer Michael Strahan on 'Good Morning America', to be precise.

Woods has always adopted a smooth-looking putting stroke, and it would appear his latest injury setback has done little to jeopardise that.

Another positive is his quick-footed movement to get some of the balls out the way - perhaps the back is getting better after all?

Check out the video footage below...

The trophy marks Woods' first prize since winning PGA Player of the Year honours in 2013.

Golfer Cody Gribble and THAT alligator; round 2 by GolfMagic

Previous
Tiger Woods letter to Augusta National aged 19, revealed!
Next
How to improve your golf swing with good arm positioning