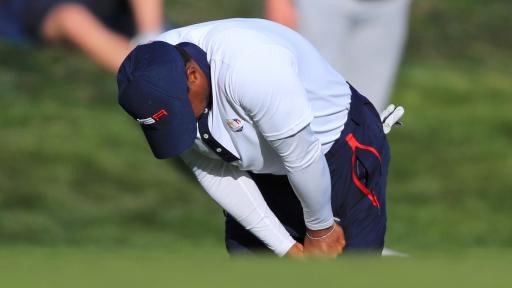 A despondent Tiger Woods admitted his recent exertions had taken their toll after he failed to win a single point in the United States’ Ryder Cup defeat at Le Golf National, writes Phil Casey at Press Association Sport.

Woods came into the event on the back of a first win in five years at the Tour Championship and supposedly more invested than ever before in the contest having acted as a vice-captain in the victory at Hazeltine in 2016.

However, the 42-year-old lost all three pairs matches – making it eight in a row stretching back to 2010 – and his overall record now reads 13 wins, 21 defeats and three halved matches in eight appearances, only one of which (in 1999) has produced a victory.

“Yeah, I played seven out of nine weeks because I qualified for Akron and you know, all of those are big events, starting with the Open Championship,” said Woods, who lost 2&1 to Jon Rahm in Sunday’s singles.

“You’ve got a World Golf Championships, you’ve got another major championship, you’ve got the [FedEx Cup] play-offs and then you have the Ryder Cup on the back side.

Woods, who won the Tour Championship, admitted he had used up a lot of energy heading into the Ryder Cup (Gareth Fuller/PA)

“So a lot of big events, and a lot of focus, a lot of energy goes into it. I was fortunate enough to have won one and we were all coming here on a high and feeling great about our games, about what we were doing, and excited about playing this week.

“For me, it’s been a lot of golf for a short period of time. I’ll have a better understanding of what my training needs to be for next year so that I certainly can endure the entire season, because this year was very much up in the air of how much I would play or if I would play at all.”

Nike Golf has the BEST golf shorts for you to grab this summer!
FootJoy's Blues Collection is perfect for your game this summer!
Woods said he had learned a lot from his Ryder Cup performance about how he will approach next year (Adam Davy/PA)

Woods, who underwent spinal fusion surgery in April 2017 and only returned to action in November, added: “It’s disappointing because I went 0-4 and that’s four points to the European team.

“And I’m one of the contributing factors to why we lost the cup, and it’s not a lot of fun. It’s frustrating because we came here, I thought we were all playing pretty well, and I just didn’t perform at the level that I had been playing, and just got behind early in the matches and never got back.”

Ryder Cup
Paul Lawrie on Ryder Cup heartache: "It would have been the icing on the cake"
Golf news
Paige Spiranac responds to golf fan who asks if her boobs are real
PGA Tour
Bryson DeChambeau FORCED OUT of Charles Schwab Challenge at Colonial
US PGA
Rory McIlroy records BEST aggregate score of first two majors in 2022
DP World Tour
Tyrrell Hatton on Irish Open return: "The fans are always incredible"