Sky Sports commentator Rich Beem hints Woods is struggling with his back. 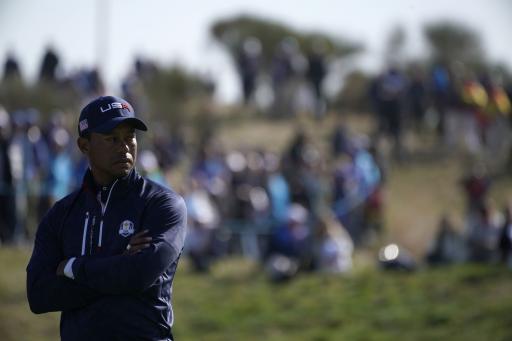 Tiger Woods may have played down any injury concern at the Ryder Cup after losing his Friday fourballs match, but Sky Sports commentator Rich Beem isn't so convinced as Woods lost his match once again on Saturday morning.

"I mean I don't know for certain but having followed him all morning, I can safely say he's not the same man we saw last weekend at the Tour Championship," said Beem.

"He looks to be struggling with an injury if you ask me. He looks in a lot of pain."

Woods played down concerns his back was causing him problems on Friday morning, despite looking to be walking gingerly and slowly at numerous times - something he has been doing on Saturday too.

"I’ll be ready come tomorrow whenever captain puts me out," Woods said on Friday. "I’m not going to work on anything. My game is fine."

Woods teamed up with Patrick Reed for the second consecutive day in the fourballs on Saturday morning, but the American duo were once again defeated by Tommy Fleetwood and Francesco Molinari 4&3, as Europe continue to hammer home their advantage.

Woods and Reed made just one birdie between them all morning.

Europe is currently 8-3 ahead, with Jordan Spieth and Justin Thomas 1 up with four holes to play against Ian Poulter and Jon Rahm in the final match of Saturday morning still ongoing.