Tiger Woods on Ryder Cup: "We talk about me in third person a lot"

Woods admits things are "a little odd" when talking to US Ryder Cup captain Jim Furyk. 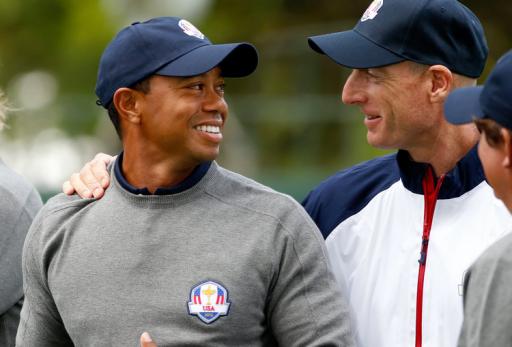 Tiger Woods admits things have got "a little odd" in the sense he, as US Ryder Cup vice-captain, needs to assess his own prospects as a potential US Ryder Cup player.

As a result, that has led to some awkward conversation between he and US Ryder Cup captain Jim Furyk, who will soon announce his four wildcard picks to join his automatic eight.

Woods narrowly missed out on the automatic spots for the Ryder Cup, finishing 10th on the list sandwiched in between Bryson DeChambeau and Phil Mickelson, with Xander Schauffele back in 12th.

“We’re talking about myself in the third person a lot,” Woods joked ahead of this week's Northern Trust event, marking the start of the FedEx Cup Playoffs.

“That’s one of the most interesting conversations I’ve ever had and I’m having a lot of fun with it. I’m one of the guys on the short list, and sometimes I have to pull myself out of there and talk about myself in the third person, which is a little odd.”

Woods was named in February as an assistant for his third consecutive team competition, even though he told Furyk at the beginning of the year that he envisioned himself as a player on the 2018 squad.

But with a number of impressive performances, none bigger than his tie for sixth at The Open where he led with eight holes to play and his runner-up spot behind Brooks Koepka at the US PGA.

"It’s been a long year, and that’s been one of my goals, to make the team. To be a part of that team you have to be one of the 12 best players, and I’m trending toward that."

Other players on top of Woods, DeChambeau, Mickelson and Schauffele to have thrown their names into the ring for one of Furyk's four wildcard picks include last week's Wyndham Championship winner Brandt Snedeker, and the likes of Tony Finau, Kevin Kisner and Kyle Stanley.

Experienced duo Zach Johnson and Matt Kuchar will also require a pick if they are to make the team.