How to watch Tiger Woods vs Phil Mickelson in their $9 million battle at Shadow Creek on Friday November 23. 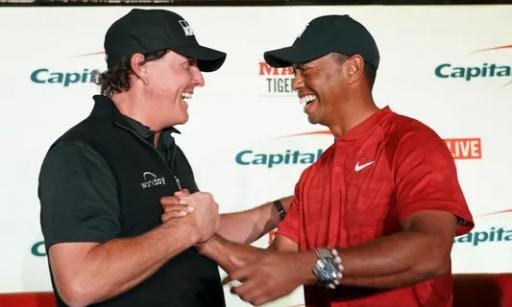 Tiger Woods and Phil Mickelson's $9 million winner-takes-all match on Friday November 23 WILL BE SHOWN LIVE ON SKY SPORTS GOLF in the UK for FREE - despite being a pay-per-view event for those in the United States!

Sky Sports will show the American broadcaster TNT's live feed from the event staged at Shadow Creek - hosted by MGM Resorts International - with a total of five hours of LIVE COVERAGE on the Sky Sports Golf channel from 8pm.

Woods and Mickelson this week said they believed their match-up would be well received by viewers as they look to attract new fans to the sport, and wanted to make the point that their showdown was much more about growing the game than about money.

Jon Rahm, however, today explained that their Thanksgiving clash has come "10 years too late" - READ HIS COMMENTS HERE.

Marking the first ever PPV golf event of all time, US viewers will need to pay $19.99 to watch the live coverage on either Bleacher Report Live, AT&T’s DIRECTV, AT&T U-verse and several other cable, satellite and other telecommunication service providers.

WATCH: PHIL AND TIGER PUT $200K ON THE LINE AT FIRST HOLE!

B/R Live will be offering an opportunity for American fans to get involved in the action with its "Pick’em Challenge" based on predictions during the match. A cool $1 million will be up for grabs for a "perfect prediction", and the overall points leader will win an all-expense paid trip to Las Vegas.

Woods and Mickelson will both be mic'd up for the contest, and we have been promised a number of side bets throughout the 18 holes such as long drive challenges and nearest-the-pin contests. The money for these side wagers will be going to the charity of the winner's choice.