Tiger Woods v today's stars: Which is a better spectacle?

Is the game a better watch today without Tiger strutting his stuff? 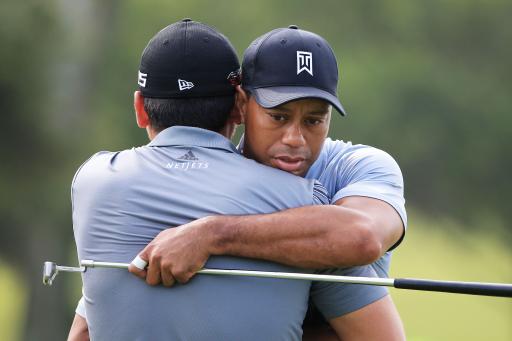 Will the next Tiger Woods please stand up.

It seems like we have been waiting a lifetime for someone to not only take the mantle of world number one but to then hang onto it for a very long time, destroying the competition with remarkable regularity.

Rewriting the history books, taking the sport to a new level, inspiring a new generation of players. You know, all the things Tiger did.

Since Woods stopped running rings around everyone - really between 1999 and 2009, and a golden 2013 season - there have been a string of possible pretenders to his crown.

Chances are we may never see a phenomenon like Woods again, which could actually be a good thing for the sport which now moves on in incremental gains, rather than huge strides. And that makes it more competitive than ever before.

Like in very recent times, Jason Day, an amazingly talented golfer with eight wins since February 2015 and the current number one.

Dustin Johnson has come of age in 2016 with back-to-back wins at the US Open and WGC-Bridgestone, but has yet to reach the top spot.

There was Jordan Speith last year, and Rory McIlroy the year before that, but both appear to be struggling to find any real consistency.

All superb players, but not since Woods have we seen a clear dominant force in the game.

Chances are we may never see a phenomenon like Woods again, which could actually be a good thing for the sport which now moves on in incremental gains, rather than huge strides. And that makes it more competitive than ever before.

To understand this, we have to look back at what Woods did for the sport. He turned pro aged 20 in late summer 1996 and by the following April he won his first major, The Masters, by a record-breaking 12 strokes. He was the youngest ever Masters champion and two months later set the record for the fastest-ever ascent to world number one.

Woods is the only golfer to hold a non-calendar year Grand Slam (Photo: Getty Images)

The American's career is simply littered with records. Like in 2000, when he landed six wins on the bounce to equal the winning streak record set by Ben Hogan in 1948.

He was the first player to hold all four major titles at the same time, the only player to be PGA Player of the Year 11 times, and of course, has 14 majors to his name.

Woods did all this by being totally focused on his goals, working on eliminating every weakness and by setting new standards of athleticism in professional golfers, allowing him to keep his edge consistently, week after week, round after round.

At the start of his career, his power off the tee was astonishing and although technology in clubs meant others soon caught up, a switch to new clubs saw him back on top where he would stay.

What really made Woods special was that he was amazing in just about every aspect of the game.

The only exception being driving accuracy where his best effort came in 2000 when ranking 54th (71%).

For a man who grew up with a poster of Jack Nicklaus on his wall, he always had a clear goal – to dominate. And beat Nicklaus' major record tally of 18.

Woods put in hour after hour of practice, in all conditions, to eliminate every potential weakness from his game. He was the best, he knew it and played with the confidence that meant his rivals knew they were playing for second.

A statistician analysed results and found that his rivals usually performed one stroke worse per round when playing against Woods than if he was not there. He was so good that many courses had to be made “Tiger Proof”, which they did by extending holes.

Fans dress up as Woods goes on to win the 2000 US Open by a record 15 shots (Photo: Getty Images)

Woods revolutionised professional golf and widened its appeal to the masses.

For anyone who saw him play in those golden years, it is the stuff of legend they pass on to friends and fellow players. Almost like being there when England lifted the World Cup in 1966, or when Ali floored Frazier.

But for the majority of golf fans, having an almost sure-fire winner who regularly wins tournaments by double-digit margins is not exactly exciting.

Even when Woods was in his pomp, it led one golf pundit to write: "Isn't Tiger Woods actually bad for golf?"

Perhaps he had a point.

Far from golf waiting for the next superstar, the professional game is actually in a golden age right now.

All the top players have long learned from Tiger’s model. The vast majority are all athletic and fit, focused and supremely talented. They practice every element of the game to eliminate any potential weakness, just as Woods did.

They all have lots of top advisers and coaches, sports psychologists, instant high-speed video replay to ensure their swings are perfect, and the burning desire to win.

Tiny things make the difference between a winner and a nearly-man. And often more than a bit of lady luck, like a plugged bunker shot or wayward gust of wind.

Dustin Johnson is currently second in the world to Day (Photo: Getty Images)

The top men in the world right now are all fine athletes, at the very peak of the sport.

It is fair to say that if there was a time machine and Tiger at his peak was faced with the current crop of players, then he would have found it much harder to have been so dominant.

He raised the bar, for sure, and today's stars have risen up to it, if not raised it even higher.

It means that at every tournament, there is not just one man with a target on his back who is clearly the player that everyone has to beat.

Instead, the competition is more fierce than ever before and therefore golf once again has the ability to throw up first-time major winners, just as we have seen in the last five majors with Jason Day (US PGA), Danny Willett (Masters), Dustin Johnson (US Open), Henrik Stenson (Open) and most recently, Jimmy Walker (US PGA).

Ask yourself, would you rather watch Woods win by 15 strokes at Pebble Beach or tune in to a head-to-head birdie battle between Stenson and Phil Mickelson at Royal Troon?

Will we ever see Woods back on the course? (Photo: Getty Images)

Woods' work is now done. A competitive comeback in 2017 would be nice, but it will more than likely lead to a final farewell.

His legacy has lifted the level of the top golf pro to incredible heights. And that means the competition, and therefore the excitement of such unpredictability, means top-level golf is in rude health.

Tiger is missed on Tour, no question, but let's just be thrilled of the fight to world number one, as each rises up to the challenge of their rival.

Adam Duckworth
Tiger Woods
Jason Day
does the game miss tiger woods
dustin johnson
masters
Previous
Turkey: Golf Guide
Next
5 tips to get you out of the bunker