"Ernie straight-up headbutts him hard, then throws him all over the place." 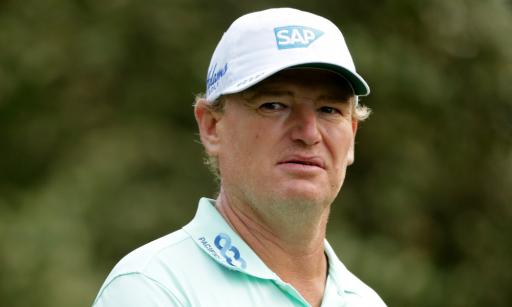 No wonder Ernie was recently voted by players as the one Tour pro you'd want by your side if it all kicked off in a bar.

Here's what Commodore revealed on the podcast...

“Marino is sitting at a bar crushing some beers. Ernie Els walks in and sits down and they have a couple beers. Els is like, “What do you do for a living?” Els has no…clue who this guy is. Marino is like, “Actually, I’m so many spots ahead of you on the money list.” They both laugh. Ernie likes him.”

From there, Commodore explains how Els then asked Marino if he was playing a tournament in Japan.

Marino said he was playing, to which the man labelled as The Big Easy said he would give him a ride back to Florida on his jet.

Three months later, both Marino and Els made the cut at the event and they finish the tournament on the Sunday. Marino was not sure if Els remembered exactly what he'd agreed previously, but then Els says he invited him.

Marino was "pumped", having never experienced such luxuries as a private jet before.

Commodore said: “They get on the plane. It’s just the two of them. They’re crushing beers. They take off. Have some food. This and that. They’re having a blast. Marino’s like, ‘This is the greatest time of my life! I’m flying private. I’m crushing beers!’

“They’re standing kind of in the aisle or whatever and Ernie Els comes up to him and says something like, ‘Are you having a good time?’…and Els is like, ‘Now we fight!’ and straight-up headbutts him..hard…Ernie starts throwing him around all over the place, and the co-pilot comes back screaming.”

The pilot then says "Ernie, not again!" - likely indicating it's not been the first time things have kicked off on Big Easy Airways.

Marino apparently, “covered in blood,” then tried to try to get some sleep, but then wakes up to Els towering over him.

The co-pilot then intervened threatening, apparently, to ground the plane, shortly before Els and Marino were separated to either side of the jet.

When the plane landed and Marino went to get off, Commodore said: “Ernie’s there waiting at the bottom of the stairs…and Ernie’s like, ‘Great flight, Steve, we’ll see you around!’”

Commodore also said Marino lost a tooth during the brawl.

Els was asked about the incident on this week’s No Laying Up podcast, and essentially confirmed what had already been said, albeit on more light-headed terms.

“It was just myself and Stevie coming from Japan to Palm Beach,” said Els.

“We had a lot to drink. There was a lot to talk about, and we kind of hugged each other. It was a lovefest on the airplane. Nobody got seriously injured. It was all in good fun. It’s just what guys do and there’s a lot of testosterone running.”