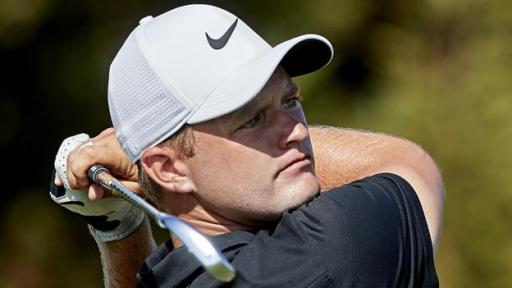 Lewis was locked in a final-round tussle with Lucas Herbert for the duration of the day, but after a nervy finish between the duo coming home it was the Englishman who held on for a three-stroke triumph on 22-under par.

It looked as though Lewis was going to hand the initiative to Herbert after finding water off the 17th tee, but he recovered superbly when draining a 50-footer for par to maintain his one-stroke advantage.

Herbert, however, sent his tee shot at 18 well left into the lake to hand Lewis the title. The Australian went on to make a double-bogey six to finish 19-under.

Lewis may have waited seven long years for a second European Tour title, but he did win the Bridgestone Challenge on the Challenge Tour a couple of weeks ago, a week before finishing tied third at the Kazakhstan Open.

"This is unbelievable, I'm so happy," said Lewis. "It's been a rough ride but this week I played hard. I got off to a bad start, but finishing off the way I finished is just brilliant."

Lewis first rose to fame as an amateur when sharing the first-round lead of the 2011 Open alongside Thomas Bjorn.

Lewis would go on to pick up the Silver Medal as the low amateur that week, before going on to secure his first European Tour title at the Portugal Masters later in October 2011.

With his latest victory in Portugal, Lewis now receives a two-year exemption on the main circuit, the European Tour.

"I really hope I do better than I did the last time," said Lewis.

"I'd say this win means more to me than the first one. I owe a lot to my team around me. I lost the fame as such. It was maybe something that I didn't want at the time, and I now I want it more than ever."