Tommy Fleetwood holes out at the first in Dubai

Tommy Fleetwood's eagle run continued in Dubai after he holed out at the very first hole in the DP World Tour Championship. 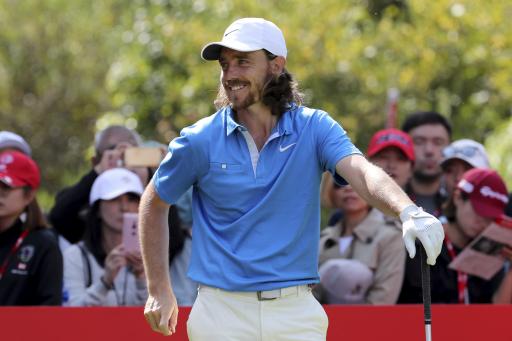 Starting his final round six shots off the lead, Fleetwood managed to make three eagles to rocket to the top of the leaderboard and eventually win the trophy at the first playoff hole.

The victory for Fleetwood put him second place and well in the mix to win the Race to Dubai, something he accomplished in 2017. Fleetwood was clearly emotional when he spoke to reporters after his win, but he made it clear that winning the Race to Dubai for a second time would mean the world to him.

"It's an absolute privilege to have a chance of winning the Race to Dubai," added Fleetwood. "It's one of the things I'm most proud of in my career.

"I will start thinking about next week down the line. But I'm happy for the challenge. I may play terribly but I feel very ready."

Well Fleetwood certainly hasn't started 'terribly' like he questioned last week. In fact, the Ryder Cup star couldn't have started any better than he did at the very first hole of the Jumeriah Golf Estates.

Fleetwood's tee shot of the par-4 first hole found the middle of the fairway, leaving himself 153 yards to the hole. The approach shot flew high in to the air, landing softly, before dropping in the hole for eagle. Watch the brilliant shot below:

For Fleetwood to win the Race to Dubai, he needs to finish in solo third place, with Bernd Wiesberger finishing furtehr down the leaderboard.

NEXT PAGE: Race to Dubai down to FIVE contenders