Tony Finau: "I've actually got a great record on Sunday"

Yet Finau ranks a lowly 178th in final round scoring average on the PGA Tour this season... 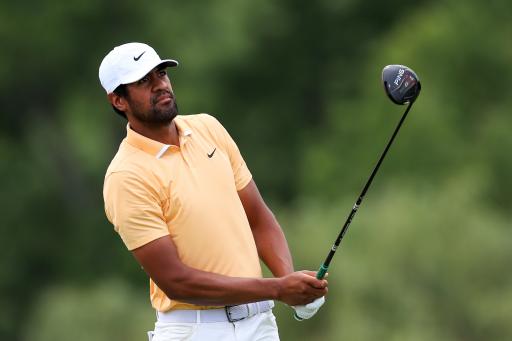 Tony Finau believes he has a "great record on Sunday" despite winning just once in his PGA Tour career at the 2016 Puerto Rico Open and currently ranking 178th in final round scoring average on the PGA Tour.

Finau was speaking to the media ahead of this week's PGA Championship at TPC Harding Park, and he was asked by one journalist to address how he is dealing with not being able to close out a second PGA Tour victory.

"Yeah, thanks," said Finau, in reply to the question. "I think there has been a little talk about that and my ability to finish, and it's definitely not anything I shy away from.

"My coach and I have done our homework on my finishes, and I've actually got a great record on Sunday. It seems to be one guy always plays better than I do. That's the luck of the draw, it's been up to this point in my career."

Despite what "homework" Finau might say he's been doing when looking at his final-round performances, the fact of the matter is that the American ranks a lowly 178th when it comes to his final round scoring average on the PGA Tour this season, averaging 71.54.

Yes okay, some Sunday flag positions are tougher than some on the opening days of a tournament, however, stats do not lie.

Finau has had three big chances to win a second PGA Tour title this season, losing out to Webb Simpson in a playoff at the Phoenix Open earlier this year, before throwing away chances when hitting the front on the weekend at the Memorial Tournament and 3M Open last month.

"I keep putting myself in that situation, and I have a proven track record myself of winning golf tournaments, not at the highest level yet, but I look at myself as a closer and as a finisher, and I know through time, I think I'll be able to prove that.

"But many tournaments and many instances, as I've looked back, I can't read too much in what others are thinking or are putting in front of me, but you know, doing my own homework on what I can do to get better, and it seems to always be that there's one or two guys on Sunday that play better than I do, and I think that hopefully that luck changes moving forward in my career."