Phil Mickelson will be seething with the news and has previously spoken out about the issue. 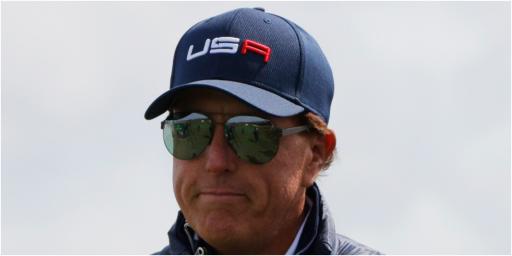 This news was coming for a while and no doubt Phil Mickelson will have a considerable amount to say in the coming days.

In a joint announcement, the U.S. Golf Association (USGA) and the R&A have said a new Model Local Rule will be made available starting in January 2022.

It reduces the length of non-putters from 48 inches to 46 inches and is likely to only come into force at elite play and not at amateur level.

For those not in the know, this has been the issue that Mickelson has been banging the drum about for quite some time.

Lefty has made some good points and previously labelled the decision to rollback the length of clubs as "pathetic".

In Mickelson's opinion, the change will promote a shorter, more violent swing (which leads to injury) and doesn't allow for length of arc to create speed.

Word is USGA is soon rolling back driver length to 46inches.This is PATHETIC.1st it promotes a shorter more violent swing (injury prone,) doesn’t allow for length of arc to create speed,and during our 1st golf boom in 40 years,our amateur gov body keeps trying to make it less fun

He has stated this decision will make golf less fun and added of the game's governing body: "Logic isn't their strong suit."

This news has been bubbling under the surface since 2016. The USGA and the R&A previously sent out notices they were researching the subject and asked for feedback.

"Admittedly, this is not the ‘answer’ to the overall distance debate/issue, but rather a simple option for competitive events.

"It’s important to note that it is not a ‘Rule of Golf,’ and as such, it is not mandated for the average, recreational golfer.

"Rather, this is an available tool for those running competitive events."

What this means going forward is that it will allow golf tournament organisers to put special rules in place for their events.

So they can allow clubs longer than 46 inches to be used or not.

Therefore, the PGA Tour might use this rule to prevent players using drivers of more than 48 inches at the Players, while the Augusta National Golf Club might not choose to implement it for the Masters.

Mickelson currently uses a driver that is 47.5 inches long. Lots of other touring pros also use a driver length greater than 46 inches.

NEXT PAGE: WHO IS TIGER WOODS' GIRLFRIEND?