Who is Tiger Woods' girlfriend and are they still TOGETHER after car crash?

The big cat famously split from Elin Nordegren in a multimillion divorce in 2010 and began dating Erica Herman in 2017. 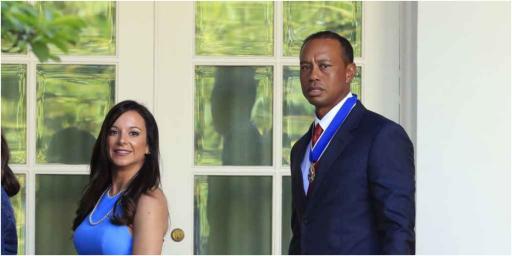 Tiger Woods has been keeping quiet and letting the media speculate as to his current condition and whether he will play again.

He has most recently been pictured at a junior golf tournament in Florida watching his son Charlie Woods compete.

The 45-year-old 15-time major champion was also pictured with his girlfriend Erica Herman by his side.

RUMOUR: TIGER WOODS LOUNGES POOLSIDE WITH "HOT BLONDE" AS HE RECOVERS FROM INJURY

They met in 2017 and she was famously besides the 18th green at Augusta National at the Masters when Tiger returned to glory in 2019.

Woods embraced his son Charlie and daughter Sam Woods along with his mother Kultida Woods.

Woods met Herman in September 2017. She had been managing Woods' Florida restaurant, which is called "The Woods Jupiter".

RELATED: TIGER WOODS' SON IS HUGE ODDS TO WIN HIS FIRST MAJOR BEFORE THE AGE OF 25!

The couple made their first public appearance together in 2017 at the Presidents Cup and she was wearing a "player spouse" badge.

Tiger Woods’ 2019 Masters win as described by those on the ground. #themasters pic.twitter.com/1SfRWzuUpS

He dated Olympic champion Lindsey Vonn, now 36, in his first "public" relationship since the split.

Dozens of other women have claimed to have had relationships with Woods.

Herman and Woods have been seen in public together a number of times since although the big cat has never posted any images of them together on his social media channels.

They were spotted together enjoying the tennis at the U.S. Open cheering on Serena Williams at Flushing Meadows.

Herman's age is not known but she is reportedly a decade younger than Woods.

She appears to have struck a good relationship with Woods' children and was pictured at the weekend standing behind Charlie too as the 82-time PGA champion watched on.

NEXT PAGE: WHAT HAPPENS IF YOU DEFLECT YOUR OWN SHOT?!