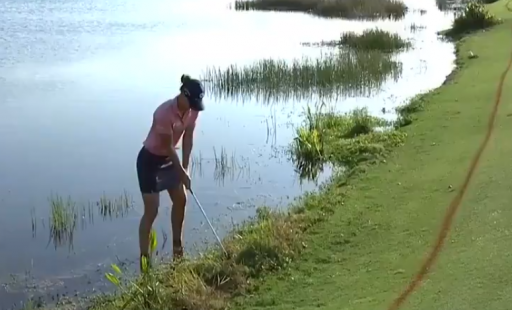 If you're anything like me, you've probably once or twice tried to play a shot from the water and then failed miserably. Tour professionals on the other hand don't seem to have quite so much of a problem!

That's exactly what faced Anne Van Dam yesterday on day one of the LPGA's season-ending CME Group Tour Championship. With her ball lodged in the bank, the Dutch star decided to refuse a penalty stroke and opted to take off her shoes and socks to play the shot. Watch what happened in the video below - it will likely go down as one of the shots of 2020:

Feet in the water? No problem for @Annevandam #SCTop10 pic.twitter.com/hE7U9touaW

"I was so scared there was a snake or something in the water," said Van Dam after her round of 1-under 71. "I was such a little girl."

Van Dam said she had 139 yards to the pin and the lie was very muddy: "I hit it pretty quickly. I was not enjoying my time in there!"

Lexi Thompson raced to the front in round one with a superb round of 7-under 65, which included eight birdies.

The American leads narrowly by one stroke over Denmark's Nanna Koerstz Madsen.

Megan Khang, Sei Young Kim and Caroline Masson are two strokes off the pace on 5-under par, with World No.1 Jin Young Ko in a logjam group at 4-under that includes Cristie Kerr, who was recently involved in a shocking golf cart incident.