Bizarre moment Pepperell asks for his own team's putt to be conceded to Charley Hull and Georgia Hall. 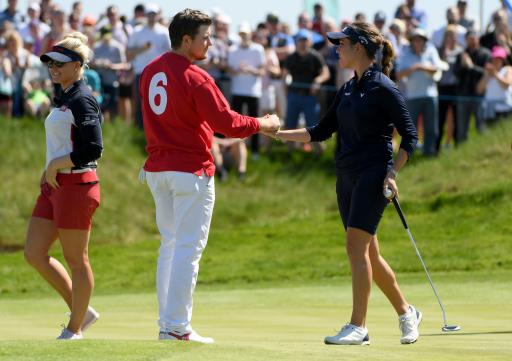 We've all been there. A putt from a couple of feet at the final hole of a match. Do you concede it, just like Jack Nicklaus did to Tony Jacklin at the 1969 Ryder Cup, or do you stand there, arms folded and make them sweat it out. We know what we would do.

One thing you should definitely NOT do, is BEG for your own team's putt to be conceded. Only that's exactly what Eddie Pepperell - playing with Matt Wallace in retro England 1966 World Cup '6' shirts - did on the final hole of England Men's showdown with England Women's Charley Hull and Georgia Hall in the first round of group matches at the GolfSixes at Centurion Club on Saturday.

With each of the players in the group mic'd up for the TV audience, Pepperell was spotted walking over to the girls while Wallace stood over his must-make two-footer to halve the match, saying: "Ey, you can always give it to him. We'd have given it to you. I promise you, we'd give it to you. Think of the Ryder Cup, Tony Jacklin. What would the crowd think."

What do you make of this? Watch below...

“We’d give that putt to you...” Eddie Pepperell trying to get Matt Wallace’s putt conceded. #GolfSixes A post shared by European Tour (@europeantour) on May 5, 2018 at 2:35pm PDT

We can only imagine what Hull must have been thinking during this moment, especially after the "gimme row" at the 2015 Solheim Cup alongside Suzann Pettersen.

Thankfully for the home fans, both English sides advanced into the quarter-finals of the event, on a day which also saw the European Women team consisting of Mel Reid and Carlotta Ciganda progress after beating defending champions Denmark (Thorbjorn Olesen and Lucas Bjerregaard).