And the loser in this scenario is golf. 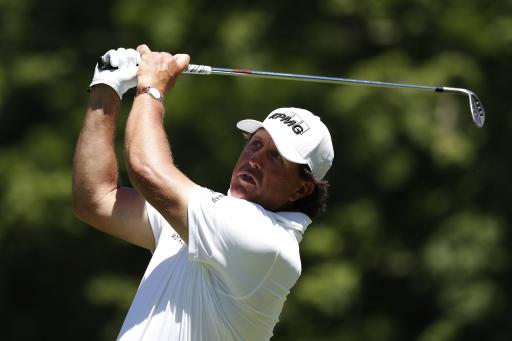 In his first start following a controversial US Open outing Phil Mickelson was again falling foul of the rules, picking up a two-shot penalty for improving his lie at A Military Tribute at the Greenbrier Classic.

Lefty walked to the front of the tee box on the seventh tee and flattened down some fescue, before realising what he had done and calling a rules official over.

Rule 13-2 states a player may not improve the area of his intended stance or swing, or his line of play, by a series of actions that includes "moving, bending or breaking anything growing or fixed" and "creating or eliminating irregularities of surface".

In the conversation between Phil and the rules official, Mickelson can be heard explaining he was going to play a low punch shot, which he later confirmed, which may have brought the grass into play.

He carded a double bogey on the hole with the penalty, going on to make a four-over 74 for the day, enough for a T66 finish at 1-under for the event.

"I just had a few bonehead moves today," Mickelson said. "It's just one of those things... A lot of times guys just inadvertently do things, and I just wasn't thinking."

Mickelson lit a fire under golf when he played a moving ball at the US Open to stop it rolling down a slope on a green.

After consulting a rules official, Phil Mickelson assessed himself a 2-stroke penalty for improving his line of play (violation of Rule 13-2). pic.twitter.com/61GiY5ggaj