WATCH: Is this the most UNNERVING golf cart bridge you have ever seen?

This certainly gives new meaning to the phrase: "Can you stick to the cart paths today please?" 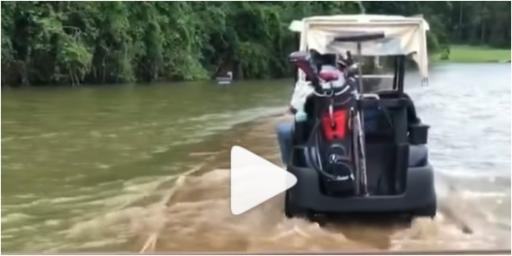 If you've never played golf in Brazil, you might want to head to Santapazienza Golf Club in Sao Paulo.

They have some interesting features, including a golf cart bridge going directly through a river.

It's part of the design and looks sketchy as hell, but it is certainly very cool and will make your experience memorable.

A video has emerged on the Instagram page @golf_gods of a group playing the course and going over the bridge.

It has been viewed thousands of times already and has prompted speculation about whether the course was in fact flooded.

"So cool oh my gosh," the voice on the video says. "It's part of the design" he adds as the golf cart goes through the water.

Reportedly, the designers of the course wanted to hide cart paths. It certainly does that.

And it gives new meaning to the phrase: "Can you stick to the cart paths today please?"

The golf club, however, is an private members' club which was several years in the making that was constructed in an area of dense forest.

It is set in a spectacular piece of land with water features, massive trees and huge elevation changes.

There are a number of amazing holes. The par-3 third hole plays at 217 yards with a green to the left of a stream that spills over little waterfalls into the lake infront of the green.

The video itself is taken from the par-4 fifth hole where it looks like you are about to do something stupid by attempting to drive on water. On the back nine there is another par-3 where your tee shop drops almost 100ft across a ravine.

The owners of the club want to host the Faldo World Championship.