Check out what happened to Sagstrom's ball on the 1st hole at Carnoustie on Sunday. 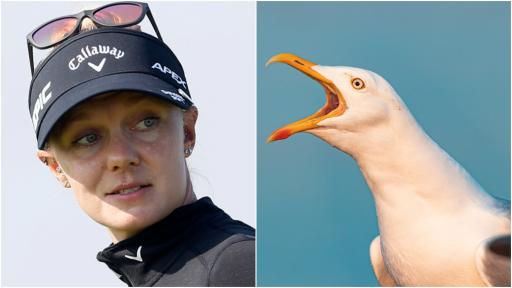 A seagull was spotted dribbling Madelene Sagstrom's golf ball back down the 1st fairway in the final round of the AIG Women's Open at Carnoustie on Sunday.

The footage was captured on social media by on-course reporter Kay Cockerill - WATCH what happened below:

Oh dear, ⁦@msagstrom⁩ drive is getting further from the hole! Pesky seagull!! pic.twitter.com/0E5gvcVSXS

Under the Rules of Golf, a player is able to replace their ball from where it first came to rest, and so the Swede - with the help of those watching on from behind the ropes - was able to play her second shot as normal and without penalty.

"When your ball in motion is accidentally deflected or stopped, there is no penalty and you will normally play the ball from wherever it lies. This includes when your ball accidentally strikes your body or your equipment."

Sagstrom went on to par the opener en route to a solid round of 3-under 68, however, she was left to rue a bogey at the tough 18th hole as she would go on to lose the tournament by just one shot to Anna Nordqvist.

Seagull interruptions on the course are not uncommon.

The one that stands out most in our memories is Steve Lowery's ball getting pinched on the iconic Island Green par-3 17th at TPC Sawgrass during the 1998 Players Championship, only to then be dropped in the water.