Can you do THIS on the green when a golf ball is already in motion?

If a ball is already on its way to the hole and it may hit your ball, can you mark it and pick it up or is it too late? 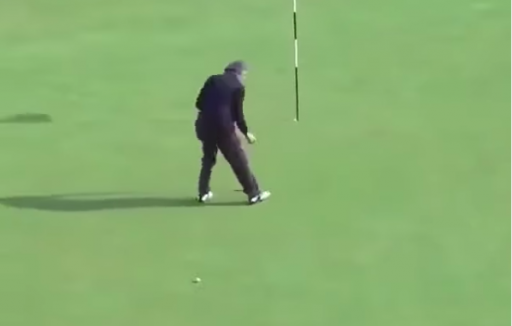 The rules of the greens in golf can be some of the most pedantic and confusing rules in the game, so we want to keep you informed as much as possible.

In the past, readers have sent in their rules discrepancies from years gone by and it has been very interesting to discover the amount of rules disputes and issues that golfers across the country experience every week.

We came across another interesting situation posted by golfrules_questions, where a ball was marked and lifted while another ball was in motion and on its way to the hole.

The golfer in question was none other than Open champion Louis Oosthuizen and he was competing in the Alfred Dunhill Links Championship when this footage emerged.

The South African hit a pitch into the green and as his ball landed and began approaching the hole, one of his playing partners quickly ran to their ball and marked it.

This was so Oosthuizen's ball did not collide with his on its way to the hole, but this has sparked an interesting situation. Are you allowed to mark and lift your ball on the green once another ball is in motion?

Well, the answer is yes. According to rule 11.3, you are allowed to mark and lift your ball in this situation. Oosthuizen's playing partner was right to mark his ball in case they collided on the putting surface.

In typical Oosthuizen fashion, he rolled in his putt for a magnificent up and down. But if his partner did not move his ball, it could have been a different situation.

Although this is one of the more straightforward rules in the game of golf, it is important that you brush up and absorb as many as possible before you play your next round.