Fisher hits the shot of his life on the par-5 18th at his home course Wentworth. 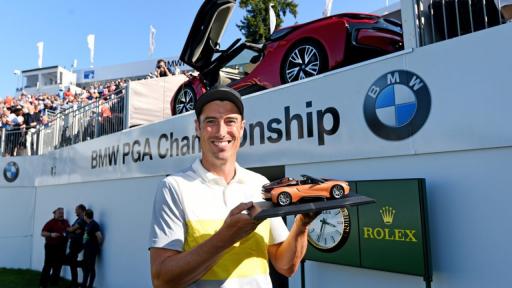 Ross Fisher knows Wentworth's West Course better than anyone as a club professional, so if anyone was going to hole-out for an albatross on the final hole and win a BMW worth £132,000 it was always going to be the Englishman.

Fisher did exactly that on Saturday, putting an exclamation point on an incredible back nine that saw him come home in 29 shots following five birdies and a closing two on the par-5 18th.

The five-time European Tour winner appeared so shocked by his effort that he even took his putter up to the green.

Despite still being well out of contention in the final round, Fisher could not replicate his efforts on Sunday, however, and closed with a 4-over 76 to finish tied 31st on 3-under par.

England's Danny Willett won the BMW PGA Championship with a three-stroke victory over Jon Rahm on 20-under par.

Willett and Rahm shared the lead heading into the final round but it was the former Masters champion who always had his nose in front from the early stages of the final round.

The Englishman birdied the second and third to move two strokes ahead, and added further birdies around the turn at the eighth and 10th.

He handed a stroke back at the 11th when somehow making a bogey from outside of 40 feet, but he recovered well and birdied the final two holes to round out his seventh European Tour title.