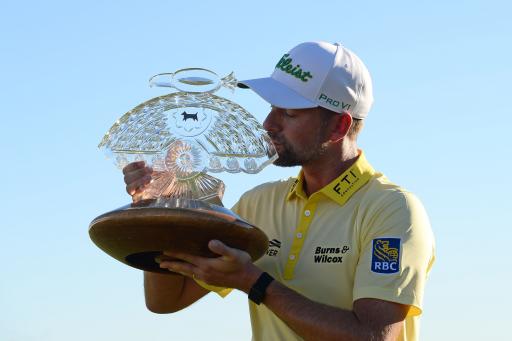 It was certainly a wild week at the Waste Management Phoenix Open and if you scroll to the bottom you'll see just how crazy the Phoenix crowds can get... But nothing could distract Webb Simpson from picking up his sixth victory on the PGA Tour.

Simpson shot a two-under par round of 69 at TPC Scottsdale, where he birdied his final two holes to tie the lead with Tony Finau, who missed a putt to win at the 18th.

At the first play-off hole, Simpson made light work of the par-4 18th and drained a 12-footer for birdie to claim his sixth PGA Tour victory, his first since the Players Championship back in 2018.

“I didn’t think it was over,” Simpson said of his thoughts walking to the 16th tee. “But I thought I am really going to have to do something special to get back in it.”

“If you’re not ready for things to turn around,” Simpson said Sunday, “they probably won’t.”

Finau was in the hunt for what would have been just his second victory on the PGA Tour, with his only win to date coming at the 2016 Puerto Rico Open at Coco Beach.

“He got the upper hand this time,” Finau said, “but I love that guy, and that’s one hell of a finish. If you’re going to birdie 18 a couple of times, you’re probably going to win.”

The famous 16th hole at TPC Scottsdale is what makes the Phoenix Open so special. The gigantic 16,000 seat stadium that surrounds the hole allows spectators to break away from the generic quiet atmosphere associated with golf.

Instead, you have thousands of fans drinking and cheering on every player that takes on the iconic hole, with many players doing everything they can to get the crowd roaring.

At this year's Waste Management Phoenix Open, one fan went to the extremes as she welcomed the players to the green. Watch the crazy moment for yourself below...

“How am I supposed to putt with that going on?”

A friend of a friend sent this to us from yesterday on 16. #WastedManagement pic.twitter.com/S4soHyTh5P

Another lady golf fan chugged two beers and then launched them onto the course...

Holly Sonders having an ould few Sunday cans with the lads!

A post shared by Donal Doc GolfcentralDaily (@docdonalgolfcentraldaily) on Feb 2, 2020 at 1:38pm PST