What is Bryson DeChambeau eating for breakfast?!

The first episode of the new GolfMagic chat show, where we discuss the Charles Schwab Challenge, Bryson DeChambeau's new size and our top picks for the RBC Heritage. 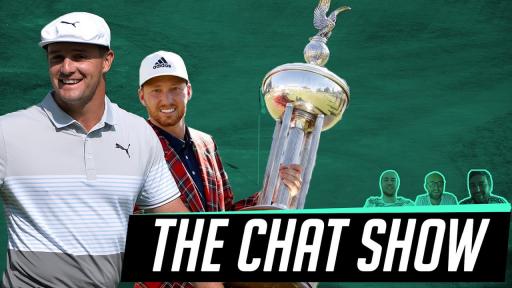 With the PGA Tour back in action, we thought there would be no better time to start our brand new chat show. Over the coming weeks we will talk all things golf, from the PGA Tour, equipment, player news and much more.

In our first episode, Andy, Jack and Stuart discuss the return of the PGA Tour, including Bryson DeChambeau's impressive new size and who we were impressed with at the Charles Schwab Challenge.

Our first topic of discussion is the return of golf. When the UK was first put into lockdown, the closure of golf courses was a topic of mass debate, with many people feeling angry that exercise such as jogging and cycling was permitted, but golf was not.

Well now golf courses have reopened and it seems everyone has the golf bug, with clubs seeing hundreds of new memberships.

The PGA Tour returned to our televisions for the first time in 91 days after the Players Championship was cancelled after the opening round.

Without any spectators, no one was sure how the players would respond, but for the first tournament back, I don't think anyone will be left feeling disappointed, well, apart from Collin Morikawa.

Daniel Berger claimed his third PGA Tour victory and his first in three years, after he beat Morikawa in a playoff to secure the win.

It was an eventful return to the PGA Tour, but who were we left feeling impressed and unimpressed with?

Justin Rose - The Englishman finished T3 and played some of the best golf we have seen from him in a long time.

Gary Woodland - After losing around 20 pounds in weight, the reigning U.S Open champion looked like a new man last week.

Jon Rahm - We expected much more from Rahm last week. He was arguably the most in-form player before the PGA Tour came to a halt, but he looked a little flustered in Texas.

Rickie Fowler - Fowler was a player who we thought would really use the time off to his advantage and should have been comfortable playign with two of his closest friends in Justin Thomas and Jordan Spieth, but he lacked any form and we hope he turns it around in the coming weeks.

Well who other to focus on than DeChambeau, who rocked up to Colonial looking like a body builder! DeChambeau has packed on some serious mass and was using it to his advantage, hitting eight drives over 350 yards.

The 26-year-old was unlucky not to force himself into the playoff, but a costly error at 17 meant DeChambeau would finish in T3.

Andy and Jack were extremely close with their picks of Xander Schauffele and Morikawa last week, so here's their top tips for the RBC Heritage: