What's the golf rule on this BIZARRE bunker incident?!

It's certainly not something you'd see very often in a bunker, but what is the ruling when something like this occurs? 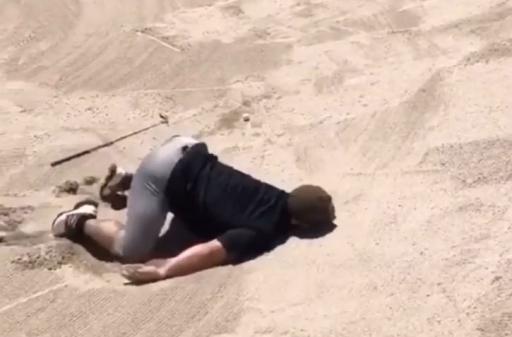 The rules of golf can be a complex world and every so often you see an incident that leaves you scratching your head and wondering what happens next and that's exactly what a lot of golf fans thought when they first saw this clip.

The video was posted on the Golf Rules Questions Instagram page, which has over 80,000 followers and helps golfers get a better understanding of the more confusing golf rules that can catch you off guard.

WATCH THE VIDEO BELOW TO SEE THE INCIDENT:

Now this isn't an incident that you see very often and this lad was clearly having a bit of a laugh after hitting a stinker of a bunker shot, but touching the sand in a bunker is a bit of a grey area (just ask Patrick Reed).

So what is the actual rule in play for this scenario?

Restrictions on Touching Sand in Bunker

1) When Touching Sand Results in Penalty. Before making a stroke at a ball in a bunker, a player must not:

- Deliberately touch sand in the bunker with a hand, club, rake or other object to test the condition of the sand to learn information for the next stroke, or

- Touch sand in the bunker with a club:

In the area right in front of or right behind the ball (except as allowed under Rule 7.1a in fairly searching for a ball or under Rule 12.2a in removing a loose impediment or movable obstruction),

In making a practice swing, or

In making the backswing for a stroke.

This incident is purely the player making a joke about his poor shot and although he heavily comes into contact with the sand, he's clearly not testing the condition of the sand for his next stroke.

So there you have it, if you fancy doing the slug dance move after chunking one in the bunker, feel free, as you won't be penalised for it.

NEXT PAGE: How high should you really tee up your golf ball? Here's the answer...