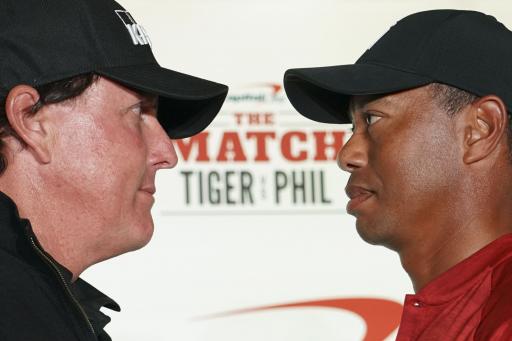 Tiger Woods and Peyton Manning will take on Phil Mickelson and Tom Brady in 'The Match: Champions for Charity' on May 24 at Medalist Golf Club in Florida, with all four players collectively making a $10 million donation to coronavirus relief efforts.

Turner Sports confirmed the donation will accompany the previously announced extension of the original Woods-Mickelson match - and with the final details now confirmed, the banter has already started.,,

The 18-hole charity match, which will be televised by TNT and TBS, will comprise of nine holes of best ball followed by nine holes of modified alternate shot.

Event organisers have also confirmed that Woods, Mickelson, Manning and Brady will each make up the $10 million donation that will go towards coronavirus relief efforts.

Fundraising will also include a partnership with the ALL IN Challenge -- an initiative that is providing food to those in need -- as well as on-course competitive challenges for charity.

It will also support national and local beneficiaries through Direct Relief, which helps equip heath care workers with medical supplies; the American Red Cross, which is involved in collecting convalescent plasma for coronavirus treatment; Save Small Business, a grant-making initiative to help small business employers who are struggling due to the pandemic; and the ALL IN Challenge.

As part of the ALL IN Challenge, each of the players will donate a custom experience that is expected to raise more funds, with viewers having the ability to enter a live raffle for those being offered by Woods and Mickelson.

It has also been confirmed that there will not be any spectators.

Mickelson beat Woods in extra holes when they battled each other in their inaugural match in 2018.