Tyson Fury may be one of the best boxers on the planet, but he is also a handy golfer. 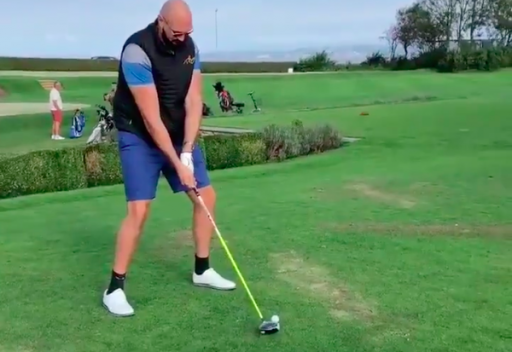 Tyson Fury completed the first defence of his WBC Heavyweight belt on Saturday night by emphatically knocking out Deontay Wilder in the 11th round in Paradise, Nevada.

Although the man from Manchester was knocked down twice in the fourth round, he got up and went on to completely dominate the fight.

He has cemented his place in boxing history as one of the greatest heavyweights to step in the ring and we will all now wait to see what the Gypsy King does next.

Over the years, Fury has spoken about his passion and innate ability to box. But he has also shown his love for golf and he has been spotted on many occasions on the golf course.

RELATED: BEST GOLF TIPS: HOW TO WARM UP CORRECTLY ON THE DRIVING RANGE

It seems that in any sport that the 33-year-old tries, he succeeds because he looks like a very handy golfer. Is there anything the six-foot nine-inch giant can't do?

As you can see in the video above, Fury is confident with a club in his hands and he appears to hit a solid drive down the fairway.

Whatever he is doing, whether he is boxing in the gym or at a press conference, he is always in stylish attire and he shows the same swagger on the golf course.

RELATED: SUNGJAE IM: WHAT'S IN THE BAG OF THE PGA TOUR BIRDIE MACHINE?

Back in 2020, Fury was seen playing golf at Bourn Golf Club in Cambridgeshire so he is definitely a big fan of our great sport.

It must be hard for Fury to find time to play golf during his relentless training camps, but after beating Wilder for a second time, he should reward himself with a few hours on the fairways.

NEXT PAGE: MICHAEL JORDAN: I'M NOT SCARED OF ANYONE IN GOLF...APART FROM IAN POULTER