Kyle Berkshire was accused of cheating on Twitter during the 2019 World Long Drive Championships. 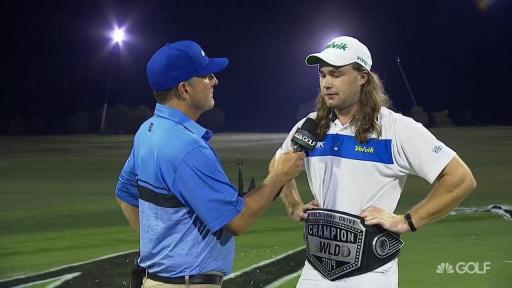 The World Long Drive Championships always results in an exciting tournament. Both the men and women who take part in their respective tournaments can hit absolute bombs and this year was no different.

Kyle Berkshire, the No.1 ranked long driver in the world, was the favourite to win the tournament this year after a fantastic season, but during the tournament, Berkshire had to defend himself on Twitter after he was accused accused of cheating.

The incident occurred following Berkshire's round of 16 win where he was down to his eighth and final shot, where he needed to beat a 413 yard drive in order to advance to the next round. Check out the video below to see what happened next...

The legend grows! @KyleBerkshire goes OB on his first 7 swings...

Then he goes 426 to survive and advance pic.twitter.com/yggtKvEJeu

Boom. Berkshire absolutely ripped his final attempt to secure a spot in Wednesday's finals and Twitter was going absolutely mad at what they had just seen from the young beast, but a very respected long drive Twitter account had a different opinion. The Twitter account with the handle 'Long Drive Sheriff' is a well known account to follow when it comes to the Long Drive Championships and knows a lot about the rules of the game.

Long Drive Sheriff posted pictures of Berkshire lining his towel alongside his tee and believed he was using it as an alignment tool, which is against the rules.

Following the accusation, Long Drive Sheriff then posted a picture of the rule book which clearly states “hitters must keep towels behind the teeing area.”

After seeing he had been accused of cheating, Berkshire took to Twitter to defend himself and said that the towel was being used to stop dew getting to his balls and affecting his speed. The 22-year-old said he wouldn't use the towel again and that the reason he was seen moving the towel (which lead to suspicion) was because a tournament official had asked him to.

The reason I was “positioning” the towel was bc Shane said the entire towel had to be behind the ball and I moved it until he was ok with where it was. My last intention is for people to think I’m intentionally using an unfair advantage against the spirit of competition

Long Drive Sheriff seemed to accept Berkshire's reasoning and tweeted: Golf Channel gave Kyle permission to have a towel on the tee box as long as it was behind the tee pod and he has assured the Sheriff he in no way had any thoughts of using that as an alignment aid. End of story.

Putting the accusations behind him, Berkshire would go on to win his quarterfinal to set up a meeting with England's Jordan Brooks in the semifinal. Berkshire beat the Englishman and faced world long drive No.2 Tim Burke in the final, but Berkshire was too much for Burke to handle and the favourite was crowned the 2019 World Long Drive Champion.