Your golf ball hits a bird and goes OUT OF BOUNDS, but what's the ruling?

It sounds unlikely but it's happened before, so make sure you know what ruling is in play if your ball deflects off a bird and goes out of bounds. 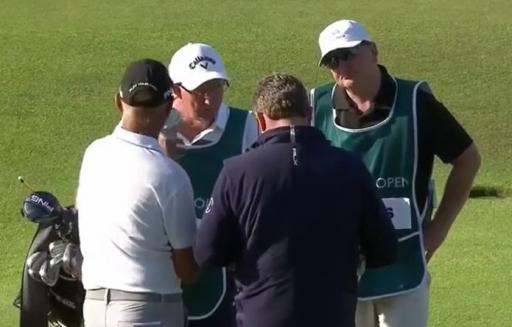 It's highly unlikely to happen to you, but it has happened in the professional game before, so what is the ruling if your golf ball deflects off of a bird and ends up out of bounds?

It would be an extremely unfortunate incident, both for yourself and for the bird, but if your ball is sailing towards the middle of the fairway and it strikes a bird mid-flight, it could end up anywhere.

In 2018 at the Senior Open Championship at St Andrews, 18-time European Tour winner Mark James hit his tee shot at the 17th hole, which looked to be straight as an arrow, before it hit a bird and went out of bounds.

The incident went viral at the time and it was recently used again on the Golf Rules Questions Instagram page to explain to golfers what the ruling in this situation is.

WATCH THE BIRD INCIDENT FROM THE RULES PAGE BELOW:

"If your ball is deflected out of bounds accidentally by an bird, what is the ruling?" posed the question on Instagram.

"Answer. The ball is to be played as it lies, in this case = out of bounds. Had the stroke been made at a ball on the green, the stroke must be cancelled and replaced and replayed. Rule 11.1."

Let's take a look at the official R&A ruling that this incident would fall under.

Rule 11.1 - Ball in Motion Accidentally Hits Person or Outside Influence

b) Ball Must Be Played as It Lies

If a player’s ball in motion accidentally hits any person or outside influence, the ball must be played as it lies, except in two situations:

Exception 1 – When Ball Played from Anywhere Except Putting Green Comes to Rest on Any Person, Animal or Moving Outside Influence: The player must not play the ball as it lies. Instead, the player must take relief.

Exception 2 – When Ball Played from Putting Green Accidentally Hits Any Person, Animal or Movable Obstruction (Including Another Ball in Motion) on Putting Green: The stroke does not count and the original ball or another ball must be replaced on its original spot (which if not known must be estimated).

NEXT PAGE: Do you know the correct golf rule for the BILLIARDS putt?