Do you know the correct golf rule for the BILLIARDS putt?

We've all tried this one on the greens before, but it would seriously cost you if you decided to do it in a competition. 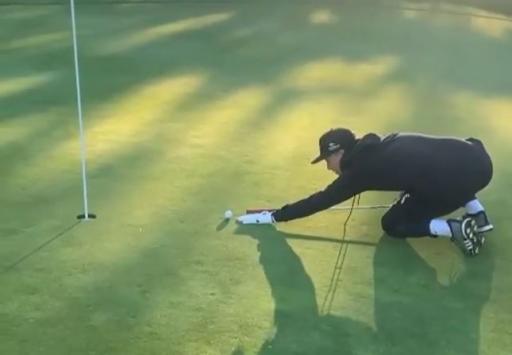 When you're playing a friendly game of golf with a few of your mates, it's expected that now and again we attempt a shot that's not exactly legal and is just a bit of fun. The billiards putt is one of the most common shots that fall into that category, but do you know the golf rule that would come into play if you did it in a competition?

You'd be a brave man (or a stupid one) to attempt this type of shot in a competition even if it was legal, but the billiards putting stroke is something that many of us have tried on the golf course.

WATCH THE BILLIARDS PUTTING TECHNIQUE BELOW:

The video was posted on the Golf Rules Questions Instagram page, asking viewers if they knew how many strokes would be counted for sinking a putt in this fashion.

"Three strokes in stroke play; loss of hole in match play. Making a billiards-type stroke is not a permissible action. Rule 10.1a." read the answer in the caption.

"For the rule to be that specific you know the guy who made the rule must have lost to a guy who sank the winner like that," joked one golf fan in the comments of the video.

Let's take a look at the R&A ruling that would come into play should someone decide to use this technique in a match or competition.

a) Fairly Striking the Ball

- The player must fairly strike at the ball with the head of the club such that there is only momentary contact between the club and the ball and must not push, scrape or scoop the ball.