Golf tip: When to take 9-iron from sand 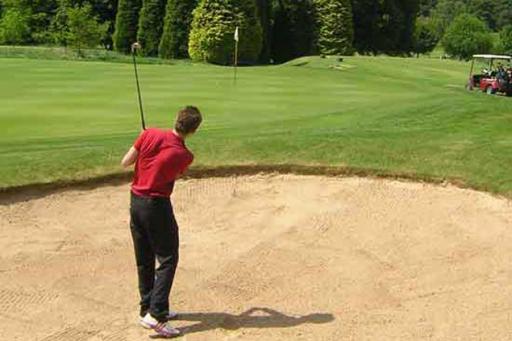 Seve Ballesteros once famously took on Nick Faldo in a bunker competition at Wentworth -but using just a 3-iron. Seve was always one for trying outrageous shots, but pros experiment all the time with different clubs out of sand traps.

Most club golfers however, when facing a bunker shot, automatically reach for the sand iron. Granted it will lift the ball out on a cushion of sand but will tend to flop high and finish well short of the hole from, say 20 yards.

Next time you have a few spare moments to practice, try a few different clubs from different lies in the practice bunker. On a shorter shot the sand-iron or even lob wedge tends to be the best option to get the ball up quickly and stop on pitching but when the pin is in the middle of the green or at the back, maybe think again.

Sometimes it’s much easier to get the ball running across the green with a normal wedge or even a 9-iron.

We asked 10-handicapper Nathaniel Sherborne to give it a go and first time, the ball popped out and rolled to within 18 inches of the hole (as the picture above shows).

Half an hour experimenting in a bunker with different clubs will allow you to choose from a variety clubs and situations. Some of the results will surprise you, like this 9-iron played from a conventional stance to a pin at the back of the green. Take lots of sand and watch how the ball gets height and then runs up to the hole.