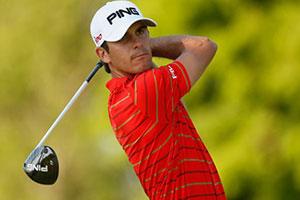 Within the past few weeks, Billy Horschel has laid claim to becoming the brightest star out of America since big-hitting Dustin Johnson.

Full of enthusiasm for the game, wearing his heart on his sleeve on just about every shot, the 26-year-old finally broke through for his maiden PGA Tour title at the weekend following a narrow one-shot victory at the Zurich Classic.

His swing might not be one fuelled with power but it’s incredibly compact and efficient.

Judging from these snaps earlier in the season, we can see that Horschel, who has recorded four top-nine finishes in his last four events on US soil, takes the club nicely back on plane. Billy keeps the club slightly outside his hands at the top, before re-routing it down as he keeps his hands close to his body